SICKNESS RATE ANALYSIS IN THE TORCH-INFECTIONS AMONG ADULT POPULATION

Nowadays the problem of the Ukrainian population’s health state is very acute. It concerns first of all spreading of the TORCH-infections among people of different age and sex, which are the threat of intrauterine contamination. The intrauterine infections cause noncarrying of pregnancy, premature delivery and stillbirth. Infants can be born with different development defects and non-specific clinical manifestations of infection. Having no etiological diagnostics it complicates the treatment and determines unfavourable prognosis for the child’s further development. During the last years the intrauterine infections take 1-3 place in the structure of the death reasons among the newly-borns since their specific gravity is from 2 to 65%. They play an essential role in the pathological genesis of many pathological states. The detection frequency of the intrauterine infections agents increased during the last years. It is connected on the one hand with its substantial spreading among the adult population and on the other hand, perhaps, with the more informative methods of diagnostics and widening of the researched agents spectrum. A special concern is caused by the infections of the TORCH group, which is connected with the high specific gravity of the TORCH-infections among the perinatal patients, degree of the disease clinical course, complexity of the diagnostics and prophylaxis. The danger of these infections lies in the peculiarities of their clinical course and the ability to lifelong persistence, as well as in their distortion of the immune answer with the formation of the secondary immunodeficiency state. We examined 2014 women and 585 men during 2013-2017s with the purpose to define the spreading of the TORCH-infections among the adult population of Cherkasy district and the city Cherkasy. Analysis of the research results proved, that the Herpes simplex virus, the cytomegalovirus and the Epstein-Barr’s virus are the most widely spread viruses among the people aged from 18 to 60. As for the spreading of the TORCHinfections within 2013-2016s, it was characterized by the progressing increase of their proliferation. However in 2017 one observed the decrease tendency in the number of the infected with the Herpes simplex virus, the cytomegalovirus and the Epstein-Barr’s virus. Concerning the spreading of the toxoplasmosis agents, they were occasionally fixed during 2013-2016s, and in 2017 they were detected among 1,03% of women and 0,39% of men. Comparing the spreading of the TORCH-infections among the women and the men during the researched period one observed the infections of such viruses as: the cytomegalovirus among 3,21±0,71% of the women and 4,18±0,83% of the men, the Epstein-Barr’s virus among 2,51±0,40% of the women and 6,23±0,42% of the men, and the Herpes simplex virus 2,59±0,76% of the women and 4,74±1,01% of the men. In general, the results of the research prove that the number of the infected adult population with the agents of the TORCH-infections is considerable and tends to increase. In order to decrease the risk of the sickness rate in the TORCHinfections and avoid getting infected it is necessary to follow the sanitary and hygienic norms and use regular medical preventive inspections. 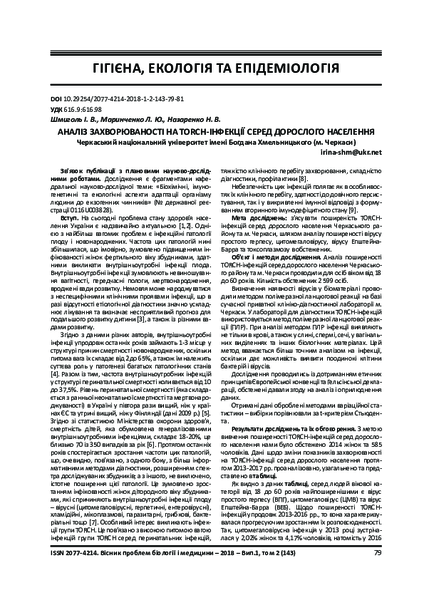