The purpose of the work is to study the peculiarites of cardiac rhythm variability (HRV) in prematurely born children. Object and methods of research. 95 children were examined in the Neonatal Pathology Department of the Zaporizhzhya City Children’s Multdisciplinary Hospital №5: the main group – 75 infants, who were born prematurely, their average gestatonal age was 33 [31; 35] weeks; control group – 17 term infants, average gestatonal age was 39 [39; 40] weeks. In the structure of the diseases in the main group perinatal defeats of the central nervous system were prevailing. We analyzed HRV using tme methods (SDNNi, RMSSD, pNN50), frequency methods (LF, HF, LF \ HF, TP), and the method of variatonal pulsometry (Mo, aMo, ΔX). Catamentstc observaton included the vegetatve status evaluaton of 20 prematurely born children at a reconstructed age of 3-4 months. Statstcal analysis of the results was conducted using “Statstca 6.0”. Results. During the Holter monitoring conductng of the studied children, violatons of rhythm and conductvity were not recorded. The circadian index in the whole observaton group was within the range of 0.98-1.1 (1.07-1.12 in recalculaton, taking into account the periods of sleep and wakefulness). The autonomic nervous system (ANS) status of the prematurely born children was characterized by the increasing of the sympathetc tone with a decrease in parasympathetc modulaton, as evidenced by the SDNN and rMSSD decreasing (40.3% at daytme and 31.4% at night, p <0.05) and increased stress -index (SI) (2.5 tmes at daytme and 2.2 tmes at night, p <0.05). It is determined that the smaller the gestatonal age was, the lower SDNNi and rMSSD were and the higher stress index was (R = 0.6, p <0.05). This indicates a sympathetc predominance and parasympathetc actvity of the CNS inhibiton with overstrain adaptve capacity throughout the day in children with lower gestatonal age. There was also the vagosympathic rato increasing during the day (LF / HF 3.9 ± 0.2 at the daytme and 4.1 ± 1.3 at night), and the decreasing of TP in two tmes in the main group compared with the control group, which also reﬂects the parasympathetc tone reducton (p <0,05). Moderate sympathicotonia in the inital vegetatve tonus was found in 76% of premature infants in the daytme and 64% of those at night, and expressed sympathicotonia was in about 20% (p <0,05). According to the data of CIG in dynamics during catamnestc observaton the reliable diﬀerences in the inital vegetatve tone was not observed. Prevalence of the sympathetc link of the VNS was maintained (45% of children had moderate sympathicotonia, and 35% had the expressed sympathicotonia). Conclusions. Sympathetc predominance and parasympathetc actvity inhibiton of the ANS with a tension of adaptaton possibilites during the day is peculiar for the premature infants. The changes we found are most likely related to the immaturity of adaptve mechanisms and mechanisms of autonomic regulaton in premature infants, and may be transient. On the other hand, premature birth can cause a damage of the central parasympathetc segment. It is advisable to conduct further research and observaton to address the need for and the degree of such states correcton. 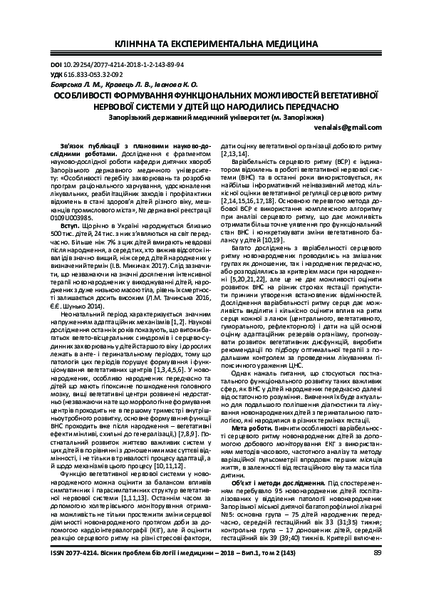