The aim of the investigation was to determine the role of the immune system cellular link in pathogenetic mechanisms of local infectious and inflammatory diseases in infants. Methods. In 25 infants with LEAVES on the background of thymomegaly (TM) detected during x-ray examination, were studied clinic-immunological peculiarities of pathological process (main group). The comparison group consisted of 18 infants with LIVZ without TM. The control group included 20 healthy children. The study of T-lymphocytes was assessed by immunofluorescence using monoclonal antibodies. Results. The pathological course of pregnancy in mothers of the main group was recorded in 68.0% of cases, and in the comparison group – in 22.2%. Deviation in the course of labor, respectively, at 40.0% and 11,0% of cases. The burden on the inheritance of allergies was 48.0% and 16.5%, respectively. Children with TM who had 2-3 times of SARS in the postnatal period, amounted to 36,0%, while no TM – only 5.5%. LIVZ in 12 children of the main group were manifested in the form of focal pneumonia, which in 6 (24.0%) cases was combined with omfolit, the clinical symptoms of which had prolonged course: starting at 2-3 weeks of age, lasted up to 2-3 months. In 4 (16.0%) cases, pneumonia was combined with catarrhal otitis, and in 2 (80%) patients it was manifested in isolation. The remaining 13 children were diagnosed with pseudofurunculesis in combination with catarrhal otitis in 5 (20.0%) cases, enterocolitis in 4 (16.0%), pyoderma – in 3 (12.04%), and in 1 (4.0%) the patient had femoral head osteomyelitis. Nosological unit and frequency of occurrence of infectious and inflammatory foci in the comparison group were the same as in patients with TM. However, the severity of symptoms LIVZ in the comparison group differed from that in the main group. If a severe form of livz in the main group (25 children) was observed in 18 (72.0%), moderate – in 5 (20.0%), and mild – in 2 (80%), then in the comparison group (18 patients) the severe course of the disease was in 5 (27.8%). The individual analysis showed that among the studied parameters of cellular immunity, the shutdown of one of them below the lower limit of the norm occurs in all 25, and two or more – in 18 (72.0%) patients. The results of comparison of the mean arithmetic values of cellular immunity in a group with individual values in a particular patient make it necessary to study the individual parameters in statistical processing of clinical and immunological material along with the definition of M±m. In the study of the relationship between cellular immunity and clinical manifestations of LIVZ in children with TM found that more informative were the values of IRI (g = 0,685), rbtl (g = +0,732), SD3+ (g = +0,625) and SD4+ cells (g = +0,580). It should be emphasized that the observed immunological changes in patients with TM differed not only from the corresponding values in healthy infants, but in children with LIVZ in the absence of TM (comparison group). Conclusion. More deep changes in parameters of cellular immunity take place in children with thymomegaly. 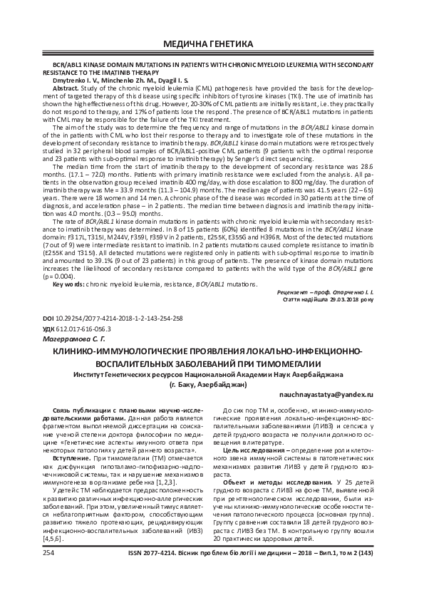