Bulletin of problems biology and medicine / Issue 1 Part 2 (143), 2018 / INVESTIGATION OF THE STATE OF VESSELS OF THE PERIODONTAL DISEASE OF TOBACCO-DEPENDENT PATIENTS WITH GENERALIZED PERIODONTITIS, ACCORDING TO THE DATA OF REOPARDOTOGRAPHY
Ilchyshyn M. P., Khoroz L. M., Vynogradova O. M.


INVESTIGATION OF THE STATE OF VESSELS OF THE PERIODONTAL DISEASE OF TOBACCO-DEPENDENT PATIENTS WITH GENERALIZED PERIODONTITIS, ACCORDING TO THE DATA OF REOPARDOTOGRAPHY

Tobacco smoking is a major problem for the country due to its high prevalence and harmful effects on human health. In smokers, all the signs of the disease become more pronounced, they are due to chemical, physical, and thermal factors, and depend on the intensity and duration of action, as well as on the individual morphological and functional features of the tissues of the oral cavity. Numerous studies have shown that smoking has a multifactorial effect on the human body. The risk of developing the disease varies greatly depending on the duration of smoking cigarettes, the intensity of exposure and type of tobacco smoke, the genetically determined sensitivity of the smoker to them. Goal. Determine the state of vessels in smokers, patients with generalized periodontitis, according to the data of reaparodontography. Object and methods. Investigation of blood circulation in periodontal tissues was carried out with the help of serial reporter P4-02. When tetrapolar technique was used method of location of two electrodes, which are located on the vestibular and oral surfaces of the alveolar process of the jaw. Qualitative indicators of reopardontography (RPG) were determined visually, paying attention to the fronts of the curve, its apex, the presence and location of the dicrotic incision. From quantitative indicators – the following were determined: rheographic index (RI); vascular tone indicator (PTS); index of elasticity (IE); Peripheral Resistance Index (IOP). The amplitude and time intervals of the RPG curves were measured using an ordinary triangle and a compass. In the analysis, quantitative characteristics were taken into account, based on the description of the shape of the RPG curve and the measurement of amplitude and time intervals. Results. To determine the effect of tobacco smoking on the functional state of periodontal vessels in 30 smokerpatients with generalized periodontitis, reopardotography was conducted in a dynamic study: before, immediately after, 10 minutes and 60 minutes after smoking cigarettes. After tobacco smoking in patients with generalized periodontitis, an increase in the rheographic index (RI) was examined 2.3 times, indicating the vasodilating effect of tobacco components on periodontal vessels. 10 minutes after the cigarette smoking, according to the RI (0.24 ± 0.031 Ohm), there was a vascular spasm, with respect to the data before and after smoking, which was observed in 60 minutes (0.21 ± 0.045 Ohm). The rate of vascular tone (PTS) in smoker patients with generalized periodontitis increased from 24.31 ± 3.12% to 27.48 ± 3.42% in 10 minutes after cigarette smoking, due to pulmonary vascular expansion blood volume. After 60 minutes after tobacco smoking, the PTS decreased to 23.05 ± 3.42%, indicating an increased tonic effect on the periodontal disease. Smoking smokers immediately after smoking cigarettes increased the peripheral resistance index: IOP = 161.44 ± 4.47 (p ≤0.01), which may be due either to the increase in the number of functioning vessels in the periodontal disease, or with the development of their walls of sclerotic changes. After 60 minutes, the index of IOP (150.27 ± 4.28%) varied to its original values (145.63 ± 4.50%). Patients with smokers with GP reaparodontogram had a slight rise, a rounded vertex and a dicotropic wave, which was located close to the top, in the upper third of the descending part of the curve. After smoking, she became more obsolescence, without a pronounced summit and characterized by gentle ascending and descending parts. The dirotic tooth was flattened or not determined. Conclusions. The evaluation of the functional state of periodontal tissues by means of reopardontography suggests that smoker patients with HF have a decrease in blood circulation, a significant increase in vascular tone, a decrease in vessel elasticity, and the development of sclerotic changes in the walls of the vessels of the microcirculatory bed. 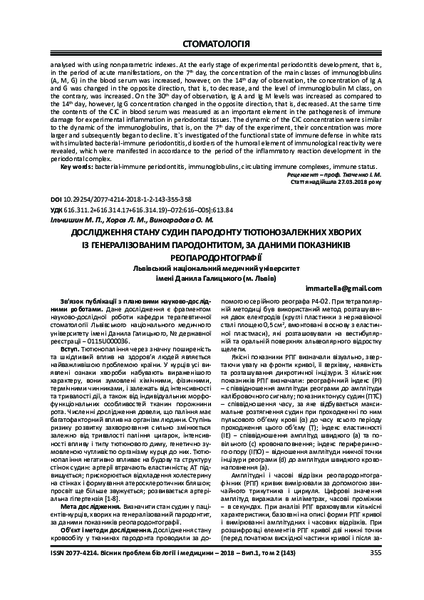