A review of the current world literature on the morphological disorders of the internal organs of rats, as a result of craniocerebral trauma (CCT). It is shown that CCT is a trigger that starts a cascade of molecular and morphological changes not only in the focus of direct mechanical damage, but also in various organs and systems of the body. Given the variety and severity of secondary disorders as a result of brain trauma, modern clinical researchers attribute CCT to traumatic brain disease (TBD) in which three main periods are distinguished: acute, intermediate and distant. It was revealed that in the long-term period of TBD after severe CCT, there are systemic morphological disorders in the lungs, kidneys, liver and myocardium. Thus, in the lungs there are clear morphological changes in the form of ischemic damage of small-caliber vessels with a violation of the permeability of the vascular wall, which with time becomes complicated by intra-alveolar hemorrhages and small-focal accumulation of edematous fluid. In the kidneys, discirculatory changes develop, which are manifested by short-term spasm of arteries and arterioles, venous fullness and areas of diapedesis hemorrhages at the boundary between cortical and cerebral substances. It is characteristic that these changes in the 2nd period of TBD flow lead to dystrophic and necrotic processes with manifestations of ischemic necrosis of tubular epithelium and interstitial edema with disorganization of connective tissue. In the liver, morphological disturbances are manifested by the fullness of portal veins and sinusoidal capillaries with lymphohistiocytic infiltration of hepatocytes, which are also complicated in the second period of TBD by the appearance of massive areas of necrosis of the lobules. However, some clinical studies prove that with CCT of mild and moderate severity in various organs and body systems, pathological processes also occur, which can be detected by instrumental and laboratory studies. That is why there are many unresolved questions on the morphology of the internal organs after the CCT of mild and moderate severity. Also in scientific sources it is shown that there is an insignificant number of experimental studies that would reveal the content of morphological disturbances as a result of CCT in immature rats. It is known that the distinctive feature of the dynamics and clinical picture of CCT in children is the influence of the traumatic factor on the brain, the growth and development of which has not yet expired. Our studies show that after CCT of mild severity in rats of different age groups are noted discirculatory changes in the liver, myocardium and kidneys accompanied by ischemia, macrophagal and lymphohistiocytic infiltration with dilated vessels of different calibers on the first, third, and fifth day. Characteristic was the fact that in immature rats the morphological changes were expressed to a greater degree than in those who were mature and were characterized by dystrophic and necrotic processes in all the organs under study except the myocardium. 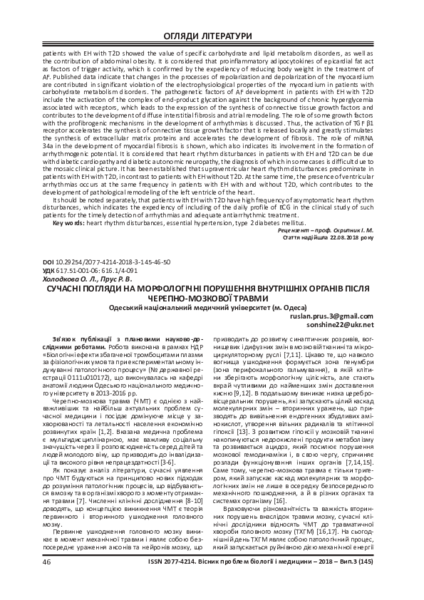