Bulletin of problems biology and medicine / Issue 3 (145), 2018 / PROINFLAMMATORY AND SUPPRESSIVE BLOOD CYTOKINES DURING EXACERBATION OF COPD
Kuyun L. A.


PROINFLAMMATORY AND SUPPRESSIVE BLOOD CYTOKINES DURING EXACERBATION OF COPD

Chronic obstructive pulmonary disease (COPD) is characterized by lung damage, particularly of peripheral airways and the lung parenchyma distal to the terminal bronchioles, especially during the exacerbation stage. The disease is associated with systemic inflammation and damage to other systems and organs. It is connected with overmedication, which causes damage to peripheral segments of the lung. Damage to the functionality of the lung caused by narrowing of the peripheral airways during COPD is irreversible. Such factors as cigarette smoke and other pollutants bring on the development of this disease by activating Toll-like receptors of the innate immune cells, which in turn causes the increase of the synthesis and the release of proinflammatory cytokines. Objective: comparative analysis of the content of proinflammatory/suppressive blood cytokines in COPD patients during exacerbation of the disease. Object and methods: the study included 104 COPD patients during the exacerbation stage. 98 healthy persons were in the control group. Blood cytokine content was determined using enzyme-linked immunosorbent assay (Vector-Best). Optical density was measured on an analyzer “Stat FAX 303 PLUS” (USA, pg/ml). The results of the study were statistically analyzed using parametrical and nonparametrical criteria using “Minitab 16” software. Colmogorov-Smirnov test was used to determine the differences between the group of patients and the control group. Key numerical data was gathered and compared using the U-criteria of Mann-Whitney, whereas the average of the two independent data sets were analyzed using the Student method. The average quantitative changes and root-mean-square values for parametrical methods and the median with 1 and 3 quartile for nonparametrical values are presented. All persons who took part in the study gave their written consent as required by the bioethics committee. Results and their discussion. The study has shown that exacerbation of COPD is associated with increased activity of the inflammatory process at the systemic level. When compared to the control group, patients with COPD exhibited significant (p<0.001) increase in the levels of proinflammatory (IL-1β, IL-6, TNF-α) and suppressive (IL-10, TGF- β) cytokines in peripheral blood. In terms of our research it was determined that systemic inflammation during the exacerbation stage of COPD is characterized by increased levels of proinflammatory and suppressive cytokines. In our opinion, such data can be interpreted as compensatory increase of suppressive activity of immunocompetent cells, which causes increased activity of the chronic inflammation during exacerbation. Relevance of the research. Chronic inflammation during COPD at the systemic level is accompanied by increased activity of proinflammatory and suppressive components of the immune response. In comparison with the control group, patients with COPD exhibited significant (p<0.001) increase of the levels of proinflammatory (IL-1β, IL-6, TNFα) and suppressive (IL-10, TGF- β) cytokines in peripheral blood. Continued research in this area will provide better understanding of pathological processes during COPD and develop much more effective immune therapies to aid patients during the exacerbation period of the disease. According to WHO, incidences of COPD are only going to grow exponentially. Therefore, there is great need for such discoveries. 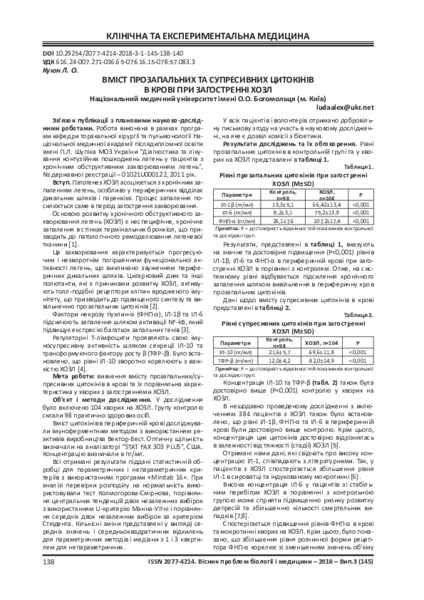