Bulletin of problems biology and medicine / Issue 3 (145), 2018 / COMPARISON OF EMBRYOTROPIC EFFECT OF CADIUM SALTS ON EMBRYOGENESIS OF RATS IN EXPERIMENT
Nefodova O. O., Halperin O. I.

In recent years, there has been an expansion of the use of various cadmium compounds and a significant increase in anthropogenic contribution to contamination of the environment, according to numerical studies, reproductive function indicators for women living in contaminated cities are significantly different from benchmarks. There is an increase in the coefficient of early neonatal morbidity and mortality, the number of birth defects; deterioration of children’s health in remote postnatal ontogenesis. In connection with this, there is a need for a comprehensive study of the effects of various salts of cadmium on the general course of embryogenesis, which is relevant from the point of view of both theoretical biology and practical medicine. The purpose of the study was to experimentally determine the effect of low doses of cadmium citrate and cadmium chloride on the overall course of embryogenesis in rats at intragastric administration. To simulate the effects and toxic effects of exposure to cadmium salts throughout the pregnancy, female Wistar rats were injected daily with cadmium citrate or cadmium chloride (in dose 1.0 mg/kg) per os. For embryonal study, rats with a dated pregnancy were using the vaginal stroke method, which made it possible to determine the stages of the estral cycle. The probable negative effect of the test substance on embryonic development was judged by the ability to increase the level of embryonic mortality (embryoal effect) and cause external and structural defects in the development of internal organs (teratogenic effect). The total development of the embryos was evaluated by the number of embryos, the number of yellow fetuses, the weight of the fetal ovary, the body mass of the embryo, its compliance with the stage of development according to generally accepted criteria for embryonic development of rats. Animal studies were conducted in accordance with the “General Ethical Principles of Animal Experiments” (Kyiv, 2001), which are in line with the European Convention for the Protection of Experimental Animals (Strasbourg, 1985). Comparison of the results of the embryotropic effect of low doses of cadmium chloride and cadmium citrate with control group parameters revealed their embryotoxicity, but the degree of embryotoxicity was different. The highest rates of total embryonic mortality were in the group of exposure to cadmium chloride: at 13 days it was 17.70 ± 1.40 (2.9 times more than control), and in the 20th day already 23.17 ± 1.43 (in 3,2 times). The increase in the rate of embryonic mortality at the 20th day is logical, as the term of intoxication of females by cadmium has increased. As shown by the analysis of the results, the rates of total embryonic mortality in the group of animals exposed to cadmium citrate were higher than control values, but lower than the exposure group of cadmium chloride. Thus, the experimental study carried out showed different embryotoxicity of cadmium salts, as evidenced by an increase in embolitics, a decrease in the number of live fetuses, general, preimplantation and post-implantational embryonic mortality rates. The teratogenic effect of low doses of cadmium chloride and cadmium citrate in these experimental conditions was not detected. The results of the study revealed a more pronounced embryotoxic effect of cadmium chloride compared to the effects of cadmium citrate at their same dose and route of administration. 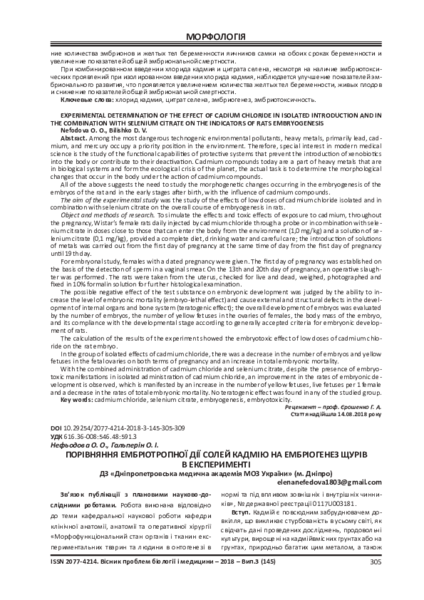