Objective: to increase the effectiveness of prevention and treatment of catarrhal gingivitis. Methods. All patients in the framework of preventive and therapeutic measures were divided into groups. The main group included 18 patients who were used as applications for inflamed gums combined phytopreparation “Immunotea” in the form of tincture; in the comparison group 1 – 16 patients who after professional oral hygiene were not carried out applications; in the comparison group 2 included 15 patients who were prescribed applications with traditional antiseptics. In turn, the main group was divided into two subgroups depending on the severity of gingivitis: 10-with a light degree of severity and 8 – with an average degree. The mechanism of action of this combined drug is due to the effects of plants included in its composition. The drug enhances the immune system, while providing antiviral, bactericidal and antitoxic effect and having antioxidant, anti-inflammatory, expectorant effect and significantly improves tissue regeneration. Results. In the analysis of the results of determination of the plaque index according to Silness and Löe in the main group and the comparison group were revealed the following facts. The hygienic condition of the oral cavity at the initial stage of studies in all groups of patients was unsatisfactory, as evidenced by the values of the plaque index for Silness and Löe in the main, comparison groups 1 and 2 were 2.23 ± 0.028, 2.27 ± 0.019 and 2.28 ± 0.015 points, respectively, before the start of therapeutic and preventive measures. A comparative evaluation of the effectiveness of traditional and proposed remedies for complex therapy was carried out, as a result of which the plaque index for Silness and Löe in the main group immediately after treatment significantly decreased by almost 51% and amounted to 1.06 ± 0.023 points, while in the other two groups the results were less significant. The plaque index for Silness and Löe in the most long-term studies continued to increase significantly directly by 12 months after treatment compared to pre-treatment indices in both the study group and the comparison groups 1 and 2, and amounted to 1.49 ± 0.025, 1.51 ± 0.020 and 1.54 ± 0.014 points (p<0.001), respectively. It should be noted that the initial decrease in this index value in the main group was associated with professional oral hygiene and motivation of patients, and most importantly, effective anti-inflammatory and antimicrobial action of the herbal drug. Immediately after treatment and 1, 3 months after the start of the course of basic therapy, the indicators of the studied hygienic index in all the studied groups decreased and remained significantly lower than before treatment. In the longer term, that is, 6 and 12 months after treatment, the hygiene index in the main group and in both comparison groups began to increase, indicating a slight deterioration of the” environmental “ situation in the oral cavity, but still remained at a significantly low compared to the indicators before the start of therapeutic and preventive measures. Conclusion. In the long-term study, 12 months after the completion of the course of basic therapy, there was an increase in the PMA index, which indicated a decrease in the preventive effectiveness of the proposed herbal medicine. 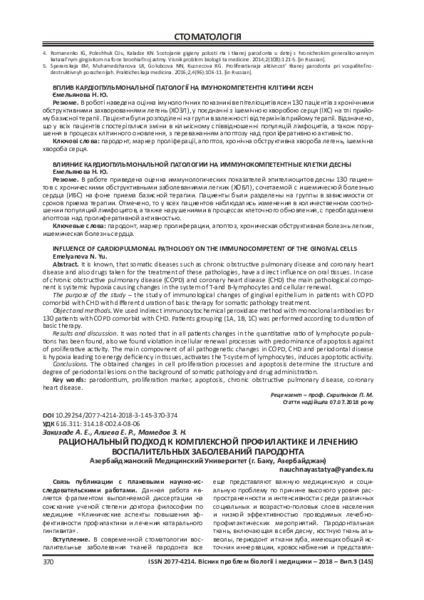