Platinum Preparations in the Therapy of Malignant Tumors

Chemotherapy, along with surgery and radiation therapy, is the most important concept in the therapy of cancer patients. In 1980s the significant, truly revolutionary, breakthrough in the field of cancer chemotherapy was the application of platinum preparations, antitumor activity of which was discovered in 1969. Platinum preparations, especially cys-platinum, carboplatin, considerably increased the percentage of tumors, particularly advanced ones, responding to chemotherapy. Platinum preparations (cys-platinum, carboplatin) up till now are the basic components of the majority of cancer polychemotherapy regimens, in spite of severe restrictions as for toxicity, inborn and acquired resistance of tumor cells. A crucial step forward was the creation of complexes of platinum with biopolymers in nucleophilic substitution reactions with significantly higher biocompatibility and low toxicity. Polyplatillen is the parent agent of fundamentally new class of anticancer platinum preparations, obtained pharmaceutically. The preparation has been clinically tested in two stages. Currently it is being serialized by the “Novopharm” company. Polyplatillen is mainly accumulated in tumor cells, excreted through bowels (that’s why there is no renal toxicity), does not inhibit a bone marrow hematosis. The major side effects, i. e., nausea and vomiting (10 %) are caused by enterotoxicity and are easily eliminated by current antiemetics. Short-term diarrhea, fever, allergic reactions (5 %) may be occurred. Polyplatillen is the most effective in treatment of liver tumor, lung tumor, ovarian tumor, gallbladder tumor, intestine tumor, gastric and pancreas tumor, peritoneum or pleura carcinomatosis (intraperitoneal, intra-arterial or intrapleural introduction), sarcomas and soft tissue tumor, locally advanced cancer types, having no other therapeutic perspective. Contraindications: generalization of tumor process, terminal states, severe irreversible dysfunctions of liver and kidneys. Application of polyplatillen causes stable remission in 55 % of patients, and in 35 % of cases it leads to stabilization of the process: life expectancy is increased by 1. 3 times in comparison with control group, patients’ life quality is improved, pain and manifestations of endogenous intoxication disappear, appetite and mood is ascended; patients become mobile. Patients, living not more than 6-8 months from the moment the diagnosis has been made, under the effect of polyplatillen treatment in 10-13 % of cases live more than 3-5 years under the regular recurrence of therapy courses. The preparation is rather promising as the remedy for treatment of locally advanced forms of thoracic and abdominal cavity malignant tumors. New immobilized platinum preparations are realistic and would lead to enhancement of therapeutic facilities and incensement of antitumoral effectiveness of platinum compounds. 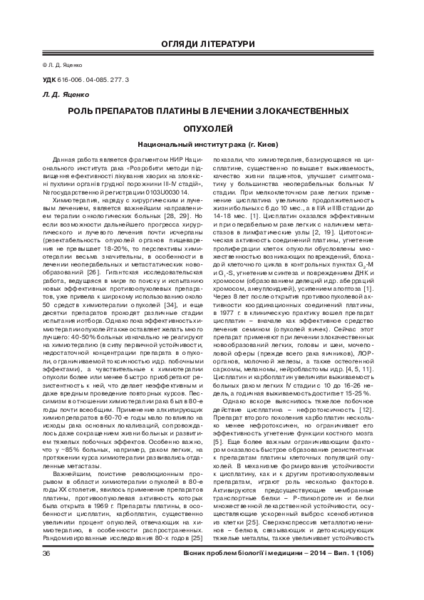