The purpose of research was to review the current scientific concepts of the nature, mechanisms and factors of congenital and acquired drug resistance of malignant neoplasms to anticancer chemo drugs, particularly to platinum preparations, as well as finding the studies aimed at the destruction of cancer cells and increase of effectiveness of anticancer chemotherapy. The acquired chemo (and radio) resistance, increasing during the specific therapy, from course to course, is due to reactive, inducible increase of function of cell’s pre-existent protective systems. The more malignant neoplasm is, the less stable is the genotype of its cells, the more probable, that mutagenic effect of radiation- and chemotherapy will facilitate the selection and consolidation of more resistant genotypes. So, the А2780 line of ovarian carcinoma cells is sensitive to cys-platinum, while the A2780CR isogenic strain, obtaining on the mediums with increasing concentrations of cys-platinum, is more resistant by 20-30 times. Object and methods of research. In providing of antitumor chemo resistance several independent systems and mechanisms are engaged. In different cells of different tumors relative contribution of these mechanisms varies. The most studied systems of chemo resistance are the membrane Р-glycoprotein and group of membrane cassette proteins of multidrug resistance (MRP). Resistance to platinum preparations and other chemotherapeutic agents is also connected with specific cell mechanisms. Antiapoptotic mechanism also plays a significant role in the mechanism of chemo resistance. Doxorubicine- resistant cells (neuroblasts) produce antiapoptotic factors, reducing the activity of apoptisis’ enzymes (caspace-3) and DNA fragmentation. Four suppressive antiapoptotic factors, disturbing proteinase-A-regulatory path, included into mechanism of apoptosis, have been determined. The significant factor of detoxication and, consequently, increase of cells’ resistance to cytostatic agents’ effect, is intracellular content of thiolic compounds, first and foremost, GSH and dependent enzymes, as well as metallothioneins. Results of research and their discussion. Since the drug resistance is the major factor of low effectiveness of cancer chemotherapy, as efforts of scientists have been directing into its overcoming, first of all, elimination of effect of the most studied factors of resistance, i. e., Р-glycoprotein and proteins of multidrug resistance. Such inhibitors are of great variety, but the majority of them are toxic and increase antitumor drugs side effects. The search for selective, minimum toxic inhibitors of drug resistance was successful. MS-209 agent is the new quinolinic acid derivative, which directly interacts with proteins of multi resistance in the human stomach cancer cells with high expression of MDR. Another new BNP7787 non-toxic preparation is water soluble and effectively decreases total toxicity, renal toxicity and myelodepression, caused by platinum preparations, simultaneously increasing therapeutic effect of cys-platinum, allowing overcoming resistance to doxorubicine. Conclusions. Thus, the task of overcoming the neoplasms’ drug resistance due to inhibition of functions of membrane pumps of Р-glycoprotein and MRP-proteins is practically and clinically feasible 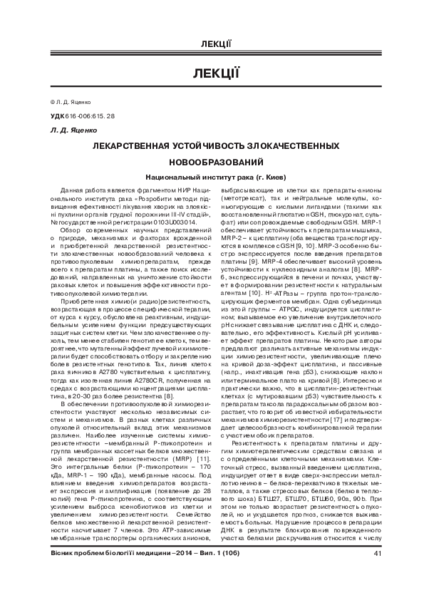