In recent years, considerable attention is paid to the diagnosis and treatment of viral diseases of the eye due to their highly contagiousness. Currently recognized pathogenic to humans, more than 120 of viruses. Most of them can affect vision. Significant number of people affected by herpes simplex virus serotype 1 (HSV- 1). It is responsible for most viral disorders of the eye. One of the characteristic features of the herpes simplex virus is its propensity to latency, which can be activated and begins to multiply causing a recurrence of viral eye diseases, including viral conjunctivitis in certain conditions ( hypothermia, stress, hormonal disorders). According to Maychuk (1979) every year nearly 400-500 thousand people falls ill with ophthalmoherpes. Despite many existing transfer mechanisms, the virus infection is performed primarily on a cellular level, and has a phase progress (Zhdanov V, 2008) that represents the penetration of the virus into the cell and release its nucleic acid from the protein shell, alteration of cell metabolism virus, followed by the synthesis of specific enzymes necessary for the reproduction of the virus with further formation of mature virions and their exit from the cell. The occurrence of eye viral pathology including viral conjunctivitis caused by herpes simplex virus (HSV). HSV reactivation often occurs in conditions of fever, cold, overheating, as well as on the basis of stress, reduction in immunological reactivity. These factors, in turn, lead to the reduction of cellular immunity and persistence of virus in long-term ocular tissues. Viral conjunctivitis (VC) are among the common lesions of eye. It is believed that VC affects about 15 % of the population. Accordingly, the problem of effective treatment VC remains largely relevant. In connection with this our attention is attracted to ophthalmic gel Ganciclovir 0. 15 % “ Virgan “, which has a high antiviral activity against members of the family Herpesviruses. The purpose of this study was to evaluate the effectiveness of antiviral eye gel Virgan (ganciclovir) in the treatment of viral conjunctivitis. A clinical study was conducted on 40 patients with viral conjunctivitis aged from 21 to 57 years. All patients received standard circuit testing, including: a study of visual acuity, biomicroscopy, corneal sensitivity study, in all tests special attention was paid to conjunctiva. Patients were divided into 2 groups: Group 1 - 20 patients (40 eyes), the control group, these patients received conventional treatment, including the antiviral medicine “Zovirax” in the form of 3 % acyclovir unguent and the second group included 20 patients (40 eyes) (basic) which the course of treatment in addition to conventional therapy Virgan was added . Before the appointment of the treatment in patients anamnesis was collected. Viral conjunctivitis characterized by the presence of complaints of foreign body sensation in the eyes, blepharospasm, lacrimation. Process was accompanied by the presence of conjunctival injection, in some cases a decrease in corneal sensitivity. Patients received treatment after collecting the anamnesis and examination. Observation of the dynamics of the pathological process was carried out using the methods of biomicroscopy, corneal sensitivity studies. The results of treatment patients with viral conjunctivitis accounted for by the following indicators: the restoration of visual acuity, corneal sensitivity, lack of signs of inflammation, clinical recovery. According to results obtained in patients after treatment we can tell that duration conservation conjunctival hyperemia in main group was less than 7. 0 ± 0. 68 and 9. 8 ± 0. 25 days in the control group (P < 0,05). Patients of the main group of corneal sensitivity recovered to 6. 6 ± 0. 4, while in the control group, 10. 9 ± 0. 2 days (P < 0,01). Clinical improvement in the study group corresponded 6. 62 ± 0. 2 days in the control group 11. 0 ± 0. 2 days (P < 0,01). Thus studies we conducted found that ganciclovir (Virgan) positively influences on the inflammatory process in viral conjunctivitis. Use of the drug in treatment of VC greatly facilitates the inflammation, reduces swelling of the conjunctiva, cornea and restores sensitivity to a large extent reduces treatment time by 4-5 days, as compared with conventional methods. 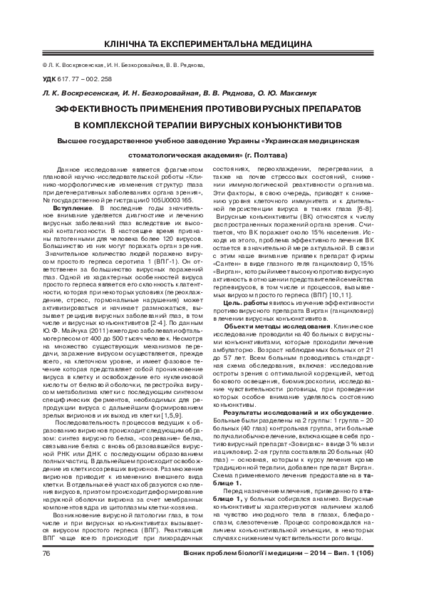