Bulletin of problems biology and medicine / Issue 1 (106), 2014 / Microelement Composition of Children’s Organism Living in the Mountainous Region of Transcarpatia and Determination of Ways for its Correction
Klitynska O. V., Butriy N. V.

Establishment of interrelation between microelementosis in an organism and intensity of effect that dental caries has on the children living in the mountainous region of Transcarpathia, and improvement of the health care efficiency activities. Clinical determination of the intensity of dental caries and method of determination of chemical elements in the hair of 45 children at the age of 12-16 years. Determine differences in the chemical composition of the body, depending on the degree of intensity of caries among children. The results of the study made it possible to establish clear guidelines for optimizing the diet of children to prevent tooth decay and conduct clinically based treatment based on the results of modern research laboratory. The stability of the body chemical composition is one of the most important components of human health. The purpose of this work is to establish the interconnection between microelementosis in the human body and intensity of dental caries intensity among children, living in the Transcarpathian mountainous region, and the improvement of the efficiency of treatment and preventive measures. The main methods of research were clinical determination of dental caries intensity and the quantity of chemical elements in hair among 45 children aged 12-16 years. The obtained results allow us to note differences in the chemical composition of the body, according to the degree of dental caries intensity among children. All the examinees were divided into 3 groups in accordance with the degree of caries activity. Among children of 14 years, who entered the first clinical group, caries intensity amounted 1,31 ± 0,38, where the indicators of carious cavities were the highest - 0,83 ± 0,18, the number of sealed teeth - 0,31 ± 0,14 deleted teeth - 0,17 ± 0,06. The second clinical group consisted of 15 children, carious intensity of whom corresponds to 3,77 ± 0,89, where the largest part of the index were carious cavities - 2,14 ± 0,46, the number of sealed teeth -1,18 ± 0,25, deleted teeth - 0,45 ± 0,18. The third clinical group included 16 children. The index of carious intensity was 8,88 ± 0,75, among which was the largest part, consisted indicators of carious cavities - 5,53 ± 0,33, sealed teeth - 2,21 ± 0,23 and the lowest rate was the number of deleted teeth - 1,14 ± 0,19. Thus, according to the results of the research the indicators of the first group have a low level of caries activity, the second group - the average degree, and the third group - a very high degree of caries activity. The analysis of the body microelement composition was held in the scientific and technical center “VIRIA - Ltd”, using X - ray fluorescence analyzer “ElvaX-med” (Ukraine, Kyiv), based on the “Methods of measuring the mass of chemical elements in the hair with the help of X-ray fluorescence method. ” Thus, on the basis of the XRF hair researches one can note the difference in the chemical composition of the body, depending on the degree of caries intensity among children. On the basis of the results one can clearly mark, that children with the very high caries intensity, i. e. a third group of the examinee, have a decrease of such chemical elements as calcium, zinc, iodine, copper, selenium, manganese, chromium, and surplus potassium, iron and chlorine. On the basis of the results we can establish for the first time the interconnection between the elemental composition of hair and intensity of dental caries among children, living in the village Nyzhniy Bystryi, Transcarpathian region, which enables us to use these data about the content of macro -and microelements in the body as informative indicators of caries threat and the child’s health in general. Using the microelemental analysis of hair we can determine vital macro - and microelements in order to estimate the body’s supply of mineral components, to form a food intake, that would fill its deficits and facilitate components assimilation. And also identify the minerals, that must be replenished by additional intake of drugs. Hair analysis on microelements extends the frameworks of standard examination schemes and facilitates the conduction of clinically based treatment, that allows to fight not only with the effects of disease but also to affect directly their causes, and also the results of the research enables one to develop effective schemes to prevent all sorts of diseases, associated with an imbalance of minerals in the body. 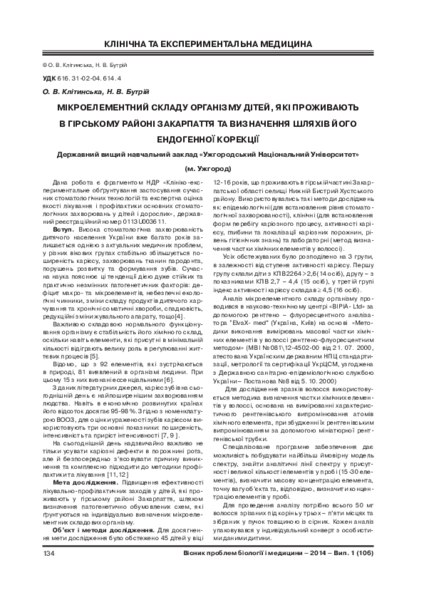