The Study Influence of Fluoroquinolones on the Biofilm Forming of S. Epidermidis

By the end of the last century microbiology was developed mainly on the basis of research of pure cultures of microorganisms, which were thought to exist purely in the form of unicellular formations and are not linked with each other. Today it is known that bacteria can form conglomerates cells, inside of which there is a close relationship. Mentioned education received the name of biofilms and the problem becomes more relevant to mod- ern medicine. Microbial biofilms is the cause of pneumonia, infections of skin and soft tissues, bones, joints, and many acute and especially, chronic bacterial infections in humans. The microbial association, in which bacteria are localized on any surface inside exogenous matrix that has the protein or polysaccharide nature are biofilms. Bac- teria that are part of biofilms are more resistant to environmental changes and the effects of antibiotics. It is known that the concentration of antibiotics that act on the planktonic bacteria cultures, are not effective against the same germs that are part of the biofilm. The aim of this work was to assess and compare the minimum ingibition concentration (MIC) of fluoroquinolones different generations for planktonic and biofilm cultures of S. epidermidis. The objects of the research were 22 strains of bacteria of Staphylococcus sрp. Among the 22 studied strains to coagulase-negative staphylococci belonged 10 strains. According to the results of the study of physiological and biochemical properties found that 6 strains belonged to the S. epidermidis strains. One of the biological properties of many bacteria is the ability to film formation. It was determined that, with 6 of the studied strains of S. еpidermidis, 3 strains were able to film formation. For further research was selected as one of the strains differed the most significant manifestation of the pathogenic factors exercised hemolysis and a high level of adhesion properties of the cells of buccal epithelium, culture produced under vital activity lipase and lecitinaza. Determination of resistance to fluoroquinolones different generations showed that the two strains S. еpidermidis, both the control and research were sensitive to ofloxacin – central zone of inhibition of growth of 17 ± 0,3 mm and levofloxacin – average area of suppression of 18 ± 0,3 mm In the course of conducted researches it is established MIC of ofloxacin for the planktonic culture of the control strains of S. еpidermidis define 0,25 mg/ml, and MIC of levofloxacin – 0,75 mg/ml, for the planktonic culture of clinical strains of MIC of ofloxacin – 0,3 mg/ml, and levofloxacin – 0,7 mg/ml. MIC for the biofilm culture of control strains for ofloxacin – 0,5 mg/ml, and levofloxacin – 1,5 mg/ml; for clinical strains – for ofloxacin – 0,6 mg/ml, and levofloxacin – 1,4 mg/ml. Established that MIC antibiotics that inhibit the growth of plankton cultures on average 2 times lower compared to the MIC, which inhibit biofilm formation. Investigational, that doses of ofloxacin and levofloxacin, that exceed in 10, 50 and 100 time MIC for a biofilm culture, result in destruction of biofilm. It found, that among antibiotics ofloxacin appeared most effective, by a con- centration in 100 times higher after МIC for tape, there was a decline of amount of CFU/ml in 1,5Ч104 for control, and in 3,0Ч103 times for a clinical strain. For a modern system of public health is important to study the mechanisms of stability of bacteria, which are part of the biofilm, because of their understanding of new opportunities to influence the formation and destruction of biofilms with the infected organism and to avoid the development of chronic infectious process. 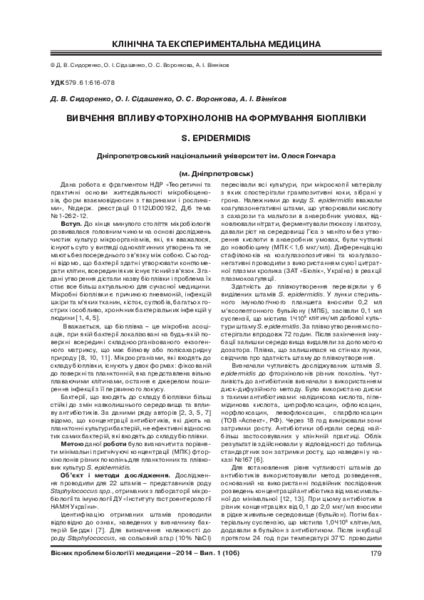