Bulletin of problems biology and medicine / Issue 1 (106), 2014 / Dynamics of Cellular Immunity Based on Different Doses and Exposure of Electromagnetic Radiation of Radiofrequency Range on the Experimental Animals
Tashpulatova G., Hamidova G., Ahmedova Kh.

The immune system is well-known to be one of the most vulnerable homeostatic systems of humans and animals, and sensitive to exposure to different physical factors, EMR in particular. In this view, the objective of the present research was to study the dynamics and evaluate immunity indicators depending on different doses of RF EMR experimental exposure. The study was conducted on 72 white rats in 2 stages exposure to 1 month and 3months. Radiation doses were 50mkVt/cm2, 500mkVt /cm2 1000mkVt/cm2 – on 1st, 2nd and 3rd groups (of 10 animals for each group), respec- tively and 12 intact control animals (for each 6 stage). The dynamics of populations of CD3, T-lymphocyte total pool and B-lymphocyte subpopulation CD4-inducers and CD8- cytotoxic T-lymphocyte in peripheral blood of the experimental animals was determined with calculation of immuno-regulation index (IRI) (ratio of CD4/CD8) The presented findings show that in the animals from the first slaughter exposed to irradiation for one month, the cellular immunity factors have no significant difference from the same indices in the intact animals. However, a tendency to a decrease in the number of T-lymphocytes of the general pool (CD3) and T-lympho- cytes inducers (CD4) was evident. B-lymphocytes (CD20) and T-lymphocytes – cytotoxic cells in the first slaughter have changed insignificantly. It corresponds to the data of literature showing that the lymphocyte populations sup- port their level long enough to adapt to the external and internal exposure while T-lymphocytes inducers (CD4) were the most subjected to destruction due to which reduction of general pool T-lymphocytes (CD3) occurs. The process was accompanied by reliable reduction in CD4 in group 3 with the maximum RF EMI doses. That very reduction of the CD4 levels resulted in a progressive decrease in the immuno-regulation index. In the animals from group 1, the indicators of cellular immunity practically did not differ from the intact rats, in animals of group 2, and especially group 3, a high dose radiation brought to a slow but progressive decrease of the test results. The most significant changes in immunologic indicators were seen in the animals in the second slaughter in 3-month exposure. In this phase of the experiment a significant difference almost in all cellular immunity indicators were observed (CD3, CD4, CD8 and IRI) which were registered not only in group 3 animals but in the second group, too. A decrease in these indicators was observed in the rats in group 1; however, the degree of the decrease was not as significant as in animals in group 3. It should be noted that B-lymphocytes had an evident tendency to a decrease in animals of groups 2 and 3. In the animals from group 1, this indicator, even in long irradiation, practically did not differ from the indicator in the intact animals. The degree of EMF effect on the cellular factors of immunity on the experimental animals considerably depends on the time of exposure and doses of irradiation. The most significant changes caused by the exposure were observed in CD4 lymphocytes while the least sig- nificant effect was in B-lymphocytes. Depression of cellular immunity rises with an increase in duration of electromagnetic exposure. 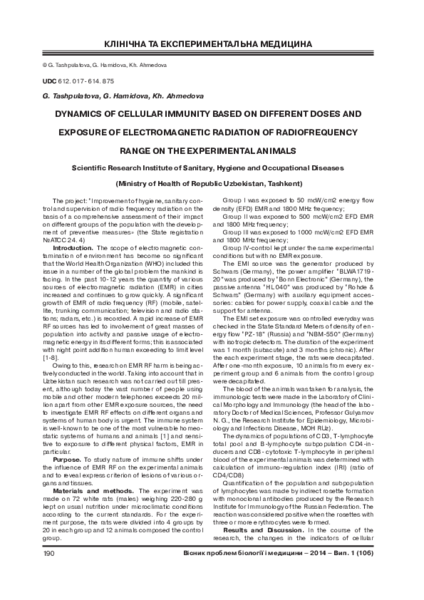