The purpose of the research is the increase of surgery efficiency in patients with maxillary sinus cysts due to development of the technique of selection of access to sinus considering the possibility of visual control dur- ing maxillary sinusotomy. Methods and materials. According to the purpose of the research we have developed the technique of ac- cess selection to maxillary sinus, based on three major factors: cyst localization, evidence of osteomeatal complex (OMC) structures pathology, which requires correction, and probable nature of cyst. Identification of possibility of endoscopic control during the surgical operation is made by means of graphical analysis of preoperational computed tomographic study of patients’ nasal cavity and paranasal sinuses. On the ground of data of computed tomography with 3D reconstruction, tracing of nostril-osteo-maxillary angle (NOMA) is performed as well as calculation of the rate of its derivative. On the basis of evaluation of size of maximum angle of visualization and its comparison with viewing angel width of endoscopes, it is concluded that there is a possibility of visual control during surgical operation and selection of the mode to access the maxillary sinus, and only after this a surgical operation should be performed. Once the NOMA have been traced, it is sized up and calculation of maximum angle of visualization (MAV) is made according to the formula: MAV = 180 – (NOMA ± ), where – is the viewing angel of endoscope, defined by its char- acteristics (e. g., = 30є is for Hopkins’ standard endoscopes, and = 45є is for wide-angle ones). Comparing the obtained derivative with angles of endoscopes, available in a clinic, where surgery must be performed, possibility of visual control during operation is determined. results and discussions. Considering the fact that our clinic is equipped with endoscope with optimal viewing angle of 70°, we, while calculating the possibilities of visualization, compared the MAV size with the angle, men- tioned above. It has been established that at the initial stage of tracing (the second point, i. e., the vertex of NOMA, has been set at the level of the anterior margin of hook-shaped ridge) the MAV size was more than 70° in 16 (34,0 %) patients and the rest patients had the less one. During recalculation, with shifting of the second point of NOMA to the level of distal margin of nasolacrimal canal, 5 cases of MAV size, exceeding 70° were found in addition, so the number of patients with cysts, located in “invisible” for visualization by 70°- endoscope during endonasal operation, consti- tuted 11 (23,4 %) individuals. Judging by this fact, tracing of alternative NOMA, with shifting of the second point from the margin of hook- shaped ridge to the distal aspects of nasolacrimal canal have been performed. The size of NOMA is 85°; the size of MAV is 65°. Thus, visualization of cyst by the 70° – endoscope, provided by the forward extension of the native open- ing of maxillary sinus to the level of distal wall of nasolacrimal canal is possible. It has been found that, in this case, it is reasonable to make endonasal access. During the surgery the validity of our calculations has been confirmed. Particularly, the anterior border of the area where the bone is attached to the wall of maxillary sinus was visible for a 70° – endoscope, after resection of hook-shaped ridge, and forward extension of sinus native fistula. The surgery has been performed without complications. During postoperative endoscopic examination a complete cyst exci- sion was confirmed. conclusions. Application of differentiated method of determination of access to maxillary sinus by means of 3D reconstruction of computed tomography data allows to increase the effectiveness of therapy at the expense of avoiding the necessity to form additional access through the anterior wall of maxillary sinus in 14,1 % of patients during the initial endonasal maxillary sinusotomy. Location of maxillary sinus cysts in the invisible zone for observation by 70°-endoscope during maxillary sinus- otomy was established in 23,4 % of patients. Micro-maxillary sinusotomy is recommended in this case. 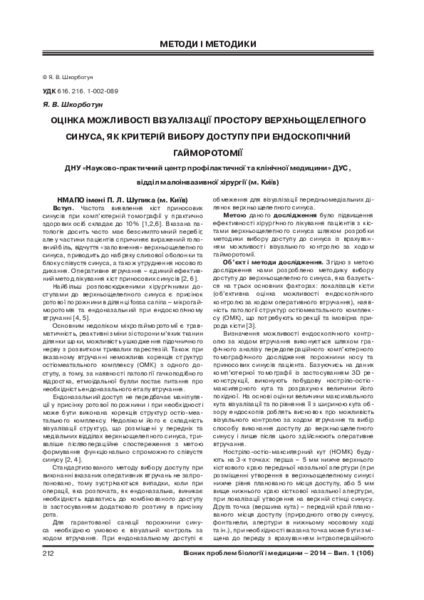