Congenital Malformations of Heart Valve for Breach of Chorion Forming

The role of the placenta normally very high, as in violation of its normal functioning arise unfavorable conditions for the development and growth of the fetus and for the development and differentiation of organs, especially the heart. Recent studies have shown that the formation of intrauterine prosperity begins in the early stages of development and disorders arising in this period, cause the formation of a defective early placenta, leading to disturbances in organogenesis. Annually per 1,000 births account for 7-17 children with CHD, even in children 8-9 double door revealed aortic valve, which is already capable of childhood lead to valve dysfunction, and 40-50 years often takes on the character of an organic defect. At the current level of clinical and instrumental diagnosis of cardiovascular surgery allows for timely diagnosis, to correct and restore the health of 97 % of children with CHD. Material was the 19 human embryos and fetuses, aged from 4th to 12th week of prenatal ontogenesis. All preparations hearts were for general anatomical study. After fixation in 10 % neutral formalin, the original tissue samples hearts, after appropriate procedures wiring, embedded in paraffin blocks from which serial sections were prepared on a microtome knife in the mode of 10 microns and stained with haematoxylin – eosin and hematoxylin and hematoxylin Heidenhain, Mallory – Slinchenko. Certain drugs taken at the Department of Human Anatomy of Dnepropetrovsk. Documentation of results of research carried out in the light microscope with a digital photo console. Studies meet the scientific standards of moral and ethical standards that meet the principles Gelsinskoy Declaration of Human Rights, the Convention of the Union of Europe on Human Rights and Biomedicine, as well as relevant laws of Ukraine and the Code of Ethics for the doctor. Violations of the fetus as a whole in violation of the formation of the placenta combined with malformations of the heart. These violations occurred in the early period of development of the heart and bookmarks provisory atrioventricular valves of the heart, ie 4-5 weeks of development and characterized by: abnormal processes delamination (bundle ventricular myocardium) and distension (cleavage fragments ventricular myocardium), and epithelial- mesenchymal transformations. As a result, there is a delay of human cardiogenesis processes delamination ventricular myocardium and atrioventricular channel and, as a consequence, impaired formation delaminational plate and its derivatives. Morphofunctional characteristic of fetal tissues during normal pregnancy and burdened different life gives reason to believe that the various conditions of intrauterine development impact on the pace and nature of tissue maturation. During this period, the effect of damaging factors both external and internal can lead to the formation of congenital malformations. Changes arising from the violation of formation of the placenta, primarily manifest violation of the blood supply as a result of hypoxic processes and, as a consequence of fetal malnutrition, retardation syndrome characterized by its growth and development, influencing the development of the fetus as a whole and of its organs, especially the heart. We were guided by conventional diagnostic features of the normal course of embryogenesis, which can be classified as the presence of developmental disorders. As a result of the foregoing, the following formed heart malformations in violation of the formation of the placenta: retrosternal cases of ectopic fetus in general – growth retardation and fetal development, violation of flexion as one of the diagnostic criteria for gestational periods. Violation of flexion (bending of the embryo and fetus), as well as violation of limb hypoplasia with phalanges, but with the formation of brush and developmental disorders of the joints is an indirect sign of morphological violations parenting placenta. 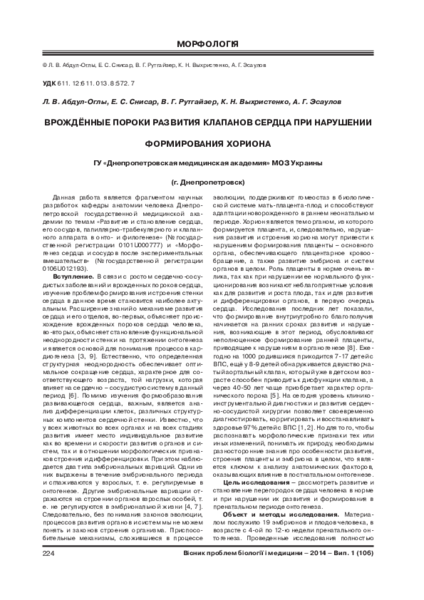