Bulletin of problems biology and medicine / Issue 1 (106), 2014 / Characteristics of the Mimic Muscles in Conditions of Experimental Neuropathy of Facial Nerve
Shovkova N. I.

Facial muscles investigation at experimental neuropathy of the facial nerve was the aim of work. The facial muscles of 20 chinchilla rabbits were examined at 3, 7, 15 and 30 days after the simulation of the facial nerve neuropathy for this purpose. The material of opposite side without pathological changes of muscle tissue served as control. The slices were taken for investigation in the same muscle section, in all cases. The activity of succinate dehydrogenase was detected on freshly frozen sections. The optical density and the area of the trans- verse sections were determined by measuring of 100 fibers in every muscle, randomly selected and uniformly distributed across the slice. Part of the material placed in paraffin, slices stained with hematoxylin and eosin, and Van Gison. The material was prepared by the usual method for electron microscopic examination. Ultrathin slices were examined under the electron microscope ПЕМ-125К. It was determined relative volume of mito- chondria, myofibrils, sarcoplasmic reticulum and sarcoplasmic layers in 50 muscle fibers on each section. It was determined the content and size of pinocytosis vesicles in the endothelial cells of capillaries also. Restructuring of muscle tissue under peripheral neuropathy should be considered as a result of the com- bined influence of the limited functions and disorders of the relationship between blood capillaries and muscle fibers. There are several stages in the dynamics of muscle’s tissue condition. The first stage (first 3 days) corresponds to reactive shifts, which are characterized by the stress reaction and confirmed by quantitative and qualitative changes: increasing of the distance between the muscle fibers and separate fibers, expanding cisterns of sarcoplasmic reticulum, violated of Z-lines right location in myofibrils, separate cristae in mitochondria shortened and fragmented. Increases content of pinocytosis vesicles in endothelial cells of capillaries simultaneously. Study of succinate dehydrogenase distribution in muscle tissue showed that its activity was reduced by 5,2 % (p < 0,05). In the second stage (after 7 days from the start of neuropathy simulation) increases the space between the sarcolemma of muscle fibers and endothelial cells of capillaries, which indicates the development of interstitial edema and could serve as a substrate for subsequent morphological development of destructive phenomena in the muscle fibers. During this period, succinate dehydrogenase activity decreased by 14,6 % (p < 0,05). Chains of muscle nuclei which occupying the central position in the third phase (15-30 days) were ob- served. There are little diffuse perivascular infiltrates in some areas. There are violated of the separate myo- fibrils integrity, often on the periphery of the myon. There are enlightened matrix and a reduced number of cristae in mitochondria of muscle fibers also. Channels of sarcoplasmic reticulum are dilated, which corre- sponds to the adaptation reorganizations. We have established by morphometric analysis that diameter of all microvessels narrows within 3 days, however over the period from 3 to 7 days the aperture of arteriols and precapillars remains contracted, although the diameter of the veins and venuls expands. After 7 days all micro-circulation chains broad. There are three types of ulrastruc- tural changes into hemo-capillars: 1) hemocapillars with polymorph endotelyocyte cells (dark and light); 2) capillars with a strong swelling of the endothelial cells; 3) micro-vessels with cytoplasmatic processes that desquamate their space. Inside the light endoteliocutes occurs a merger of the small micropinocyte bubbles into big vacuoles and multi-vesicular bodies. The modifications in both dark and light mitochonders are polymorphic by origin. In some of mitochonders appear myelin figures on one of the poles surrounded by enlightened matrix. The consolidated cytoplasm is typical for endothelial cells, concentration of organelles in bilateral zones and different electronic den- sity of the mitochondria matrix. In the postcapillar venules endothelium becomes necrotic and peels as well as the integrity of basal membrane. In conclusion we should admit that destructive changes occur in mimic muscles in experimental neuropathy in all elements of microcirculation. 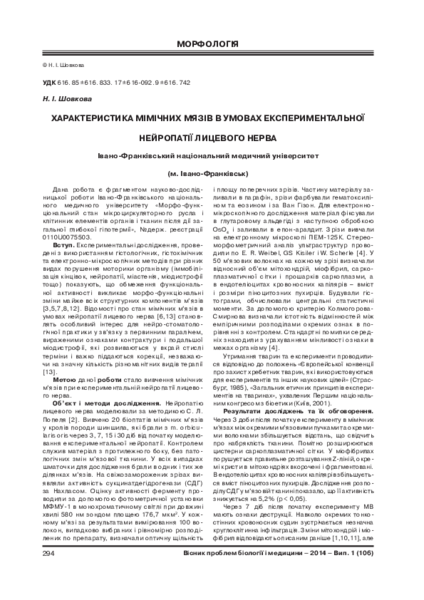