Pathogistological classification is based on the features of tissue and cellular atypia, benign and malignant tumors, respectively, not considering their histogenesis. Ascertainment of histogenesis of salivary tumors is crucial not only for correct morphological diagnostics of tumors, but also for selection and scientific grounds of treatment mode. The purpose of the research is the ascertainment of histogenesis of greater salivary tumors in comparison with defined normal structural-functional parts. It has been established that normal greater salivary glands have various structural-functional parts. Certain parts of greater salivary glands contain high special-purpose, differentiated cells, capable of physiological regeneration. Due to this fact, in case of its disorder, tumors with uni-and pleiomorphic growth may appear. Tumors with unicentric growth, from the point of view of histogenesis, are developed from individual structural-functional parts of salivary glands. At the same time histostructure of tumors is characterized by partial or complete preservation by cells of their both histochemical and ultrastrucural differentiation. So, in the secretory part a mu-coid, serous and mixed adenocarcinoma is distinguished. In case of secretory cycle disorder, vacuoles, specific for vacuolated acinous adenocarcinoma, are formed in these cells near the Golgi apparatus. Finally, in neoplastic proliferation of mostly myoepithelial cells, surrounded by acinuses of secretory part, myoepitheliomas are formed. Tumors, which histologically originate from intercalated duct, have the low degree of differentiation of cells with different content of connective tissue component. Due to this, a solid type, when stroma is low-graded, a trabecular type, where it is completely-graded and glandular type, when collagen fibers form septums next to myoepithelial cells, which separate adenomatous and cystous acinuses – adenocystic cancer, should be differentiated. In the welted intercalated duct, due to presence of oncocytes, oncocytoma originates, which is histologically characterized by the presence of big light cells, ultrastructurally containing osmiophilic granules of multiple sizes of apudomas’ nature in cytoplasm. In the infrapartite ducts, depending on the content of basal and prismatic epithelial cells, a basal-cellular cancer should be identified, as well as solid, trabecular and cribrous adenocarcinomas. Lymphatic epithelioma (Warthin’s tumor) histostructurally contains both epithelial cells (ciliated, goblet, short and long intercalated cells) and lymphoid accumulations, adjacent to stroma. Such cellular structure is typical for lobular ducts of salivary glands, which Warthin’s tumor is possibly originated from, and contains the elements of sphincters’ laminated pavement epithelium, as well as numerous goblet and individual ciliated cells of multirowed epithelium. Thus, tumors with unicentric growth are developed histogenetically from certain epithelial structures of various structural-functional parts of salivary glands. However, specific morphological features of these tumors, unlike nor-mal structures, are presence of tissue, and in some cases, cellular atypia. It is the latter that determines malignancy of tumor growth. The group of pleiomorphic tumors include mixed salivary tumor. It contains various tissue structures, atypical for normal structure of mature salivary gland. Complex morphological studies found, that its structure resembles certain stages of embryonic development. 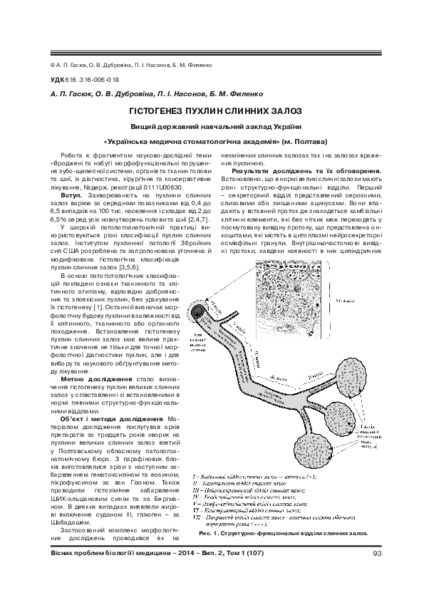