Pulpitis is the stage of carious progression that develops in the form of hyperergic inflammation against the background of previous pulp sensitization, caused by the decay products of organic substances of hard tooth tissues and microorganisms’ endotoxins of carious focus. In deep caries the significant destructive changes of dentin, reaching to pulp chamber, as well as progression of inflammatory pulp reaction are observed. Deep caries originates mainly on the 111-140 day of the experiment and is characterized by the complete enamel decay and partial dentin destruction, but is separated from pulp by the preserved predentin area. In the experiment, stipulated by cariogenic diet, no bacterial clumps, penetrating into dentinal fibers, have been identified. This makes evident that in presented experimental model aseptic caries is being developed. It has been established that bulbous portion of pulp, adjoining to carious focus, is microscopically characterized by odontoblasts’ proliferation, evident by numerous mitosis. It should be noted that odontoblasts’ nuclei are located at the level, different to the level of multilayered structures’ formation. Among individual odontoblasts, light lumens, filled with hydropic fluid that separates odontoblasts and penetrates into superdontoblastic space, causing atrophy and destruction of odontoblasts’ processes, are found. Right under the odontoblastic layer around hyperemic ves-sels, multiple cells of fibroblastic type are identified, providing pulp with replacing dentin. In deep caries, pulp of cervical portion of tooth is also reactive. It has been established that in this area bodies of odontoblasts, being of smaller sizes, penetrate into individual dentinal tubules. This is due to the fact that hydropic fluid accumulates in subodontal space, formed by odontoblasts and basal layer of Weil. This layer is located be-tween odontoblasts and microvessels and characterized by the presence of numerous cells of odontoblastic type and fibrous structures. Due to proliferation and differentiation of fibroblasts, the secondary replacing dentin can be formed in the cervical portion of pulp chamber. However, its formation, filling the lumen of cervical portion of pulp chamber, may be shifted onto the root one. It should be noted that, unlike the norm, odontoblasts of root portion change its spatial orientation. So, they are located perpendicularly relative to predentin with its bigger diameter, and its big processes penetrate into in-dividual dentinal tubules. This perpendicular location of odontoblasts is obviously connected with minor edema of super- and subodontoblastic spaces. Unlike cervical portion, in the root portion a miotic activity of fibroblasts is less evident. The formation of replacing dentin in deep caries without perforation of pulp chamber is to be considered as adaptive pulp reaction on enamel and dentin’s destructive processes. In the root and cervical portions of pulp local blood circulation disorders and odontoblasts’ dystrophy, which are of partially reversible nature, are identified. In the root portion the reversible changes are developed. 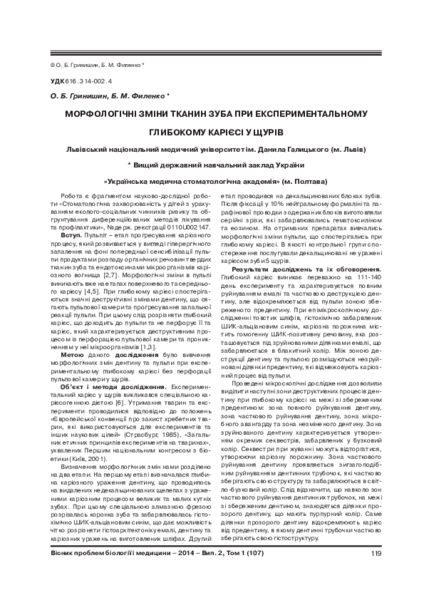