Indisputable that the enamel is the hardest, enhanced and resistant tissue in the body. Its original name is substantia adamantina, indicating comparability of the physical properties of enamel with a diamond that is an exaggeration. At the moment accepted that the enamel combines strength of quartz and fragility of porcelain, which is a speculative view. And in general, to seek an analogy of enamel in inanimate nature has no sense, because it is – the product of the secretory activity of the special cells of epithelial origin, called enameloblast, that generally form the composite structure, and not monolithic. Usually, studying the structure of of enamel, researchers resort to the decompositional analysis, the meaning of which consists in allocation it in certain hierarchical levels of the organization. Undoubtedly, in view of the principle of constructive cognition of microscopic ordering of enamel, it is necessary and useful, but it should be understood that the general properties can not be reduced to some level of organization, and even the summation of them, if we disregard the mutual layered configuration in the three-dimensional volume of the structural elements. But, whatever the strength and sustainability had enamel, it is not intended by nature to preserve their integrity, in the process of chewing it is exposed to natural abrasion, resulting in the exposure of dentin and gradual alteration. Therefore, its protective function for dentin is a relative, that makes several different approach to the consideration of the known facts about the features of the enamel coating form on the working surfaces of the teeth. In this regard, deserve special attention occlusal surfaces of posterior teeth (molars), which were the subject of our study in order to determine the characteristics of the microscopic organization of the enamel coating form, as well as changes of the configuration relations between enamel and dentin abrasion as far as of horizontal abrasion of crown. One of the objectives of our study was the need to obtain data on changes in of the configuration ratio between the enamel and dentin as far as a gradual horizontal abrasion of chewing teeth crowns. Unfortunately, for the known reasons, to follow this process in his lifetime condition is not possible. So we had to resort to artificial abrasive grind-ing of tooth crowns, which, in our opinion, can serve as a valid model of erasing it during a long lifetime operation. Based on a study in light and scanning electron microscopy of thin sections of the molars, of resin, it was found that their enamel coating consists of a composition of a set of three groups of crystal fibers, organized in such a manner that provides optimum resistance to deformation of enamel changes in the occlusal plane. The stiffest resistance has its surface layer, due to close alliance of the crystal fibers, which lies at right angles to the plane of the horizontal shift. But the overall abrasion resistance of chewing teeth crowns depends not only on the strength of enamel largely determines its genetically predetermined tuberculate-folded form of the occlusal surface, thereby during physiological erasing is provided optimal preservation of the depth of the composite ratio between different on strength and hardness of the tissue structures – dentine and enamel. 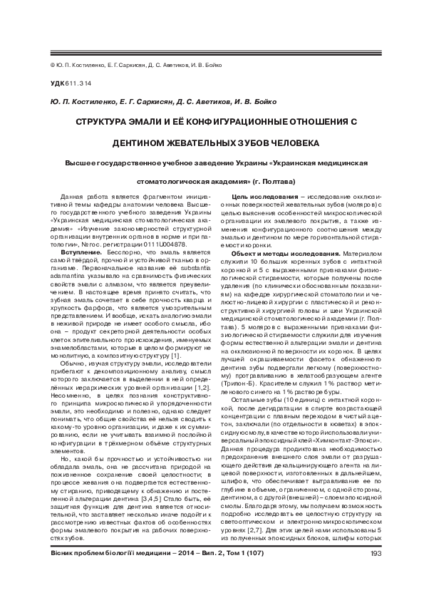