Malocclusion in sagittal direction, distal occlusion in particular, is the most common anomaly of den-toalveolar apparatus. According to the home and foreign researchers’ reports, Angle Class II malocclusions con-stitute greater than half of total cases of malocclusions. Malocclusion of this type is caused by change of morpho-logic parameters, which deviations from normal indices vary, depending on the direction of dentoalveolar apparatus growth. The significant criterion in selection of therapeutic approach is biometric indices, obtained during study casts’ analysis, which allows determining the severity of morphological changes. However, knowledge about symptom group of morphological features of dentoalveolar apparatus, typical for Angle Class II malocclusions, is based only on the study of type of dental arches growth by means of lateral tele-roentgenograms of the head. Purpose of the research. Study and analysis of morphological changes at the dentoalveolar level in patients with Angle Class II malocclusions with different type of mandibular dental arch growth. Object and methods of research. 55 patients, aged from 10 to 13, with Angle Class II malocclusions have been examined. Adolescents were divided into five groups according to the type of mandibular dental arch growth. Type of growth has been determined by orthopantomograms while measuring the mandibular angle. The I group includ-ed 21 patients with neutral type of growth (mandibular angle is 123±5є); the II group included 11 adolescents with vertical type of growth with mandibular angle greater than 128є; the ІІІ group included 9 patients with horizontal type of growth (mandibular angle is less than 118є); the ІV group included 9 adolescents with combined (neutral with vertical) type of growth; the V group included 5 children with combined (neutral with horizontal) type of mandibular dental arch growth. 55 pairs of study casts have been studied. Width of dentitions on the area of canines, first premolars and mo-lars was measured by the Linder-Hart method, length of the frontal area was measured by the Korkhaus method. Altogether 440 measurements have been made by means of electronic vernier caliper, accurate within 0, 01 mm. All study materials have been statistically processed. During biometric examination of study casts in 55 patients, aged from 10 to 13, with Angle Class II malocclu-sions and analysis of findings, obtained from all groups, a typical symptom group of morphological malfunctions of various severity has been found, associated with tapering at canines on the maxillary arch in neutral and com-bined (neutral/horizontal), on the mandibular arch – in neutral, horizontal and combined (neutral/horizontal) type of mandibular dental arch growth, for all groups – tapering between maxillomandibular premolars, tapering of upper and lower dentitions between first permanent molars, extension of frontal area of upper dentition and shortening of frontal area of lower dentition. The most significant morphological changes were observed in the group of patients with horizontal type of man-dibular dental arch growth. Perspectives of further researches. To establish the correlation between morphological symptom group and aesthetic changes in children with Angle Class IImalocclusions with different type of mandibular dental arch growth. 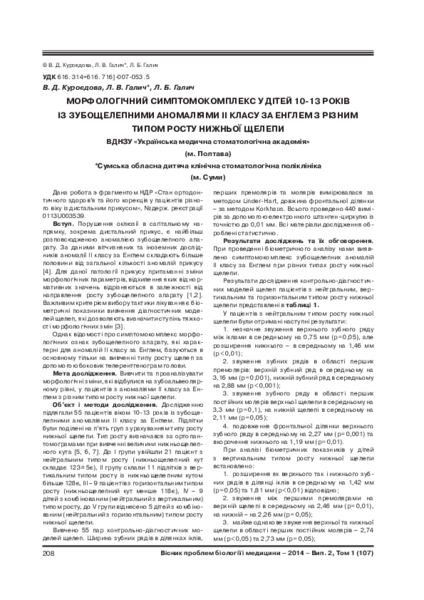