LASER PUNCTURE IN PROPHYLAXIS OF PERIIMPLANTITIS

The purpose of the researchis to analyze the effectiveness of laser puncture application in prophylaxis of peri-implantitis. Object and methods of research. 27 patients, aged from 18 to 52 years old, were observed and divided into two groups. Group I included 12 people, received conventional postoperative treatment, and was the control one. Group II included 15 people, whose conventional postoperative treatment were supplemented by the course of laser puncture. This group of people has undergone reflexotherapy in compliance with application instructions, suggested by I. O. Pohodenko-Chudakova, Т. L. Shevela (2012). The new acupuncture needle (No. 924 patent of the Republic of Belarus) was used for exposure. The acupuncture needle consists of a cylindrical rod with a pointed end, made of dissimilar materials, other than the fact that, in order to reduce procedure time by simultane-ous exposure to advanced laser radiation with the direct mechanical introduction of needle into acupuncture points (AT); needle’s dissimilar materials are concentric layers, and the outer layer is metal and the inner is made of laser – transparent material. The suggested instrument allows exposing simultaneously on acupuncture point with both mechanically pointed end, and laser radiation, conducted through the transparent inner layer. To ensure the safety of the physician and patient the design of the laser is provided with normally closed aperture, which allows the laser beam only after the introduction of the special end of flexible optical fiber into the feed opening on laser housing. In case of accidental disengagement of the laser and optical fiber, the laser aperture is blocked automatically in a flash, and the laser beam is «closed» inside the device and does not go out. Thus, the suggested acupuncture needle allows, along with mechanical expose, to perform additional laser radiation on the AT. Course of 10 sessions were performed daily or every other day. Long-term results after 6 months were studied after prosthetics (1 year after surgery stage of dental implants setting). Diagnosis of peri-implantitis was made on the basis of the following clinical signs: sense of discomfort in the area of dental implant location, pain, hyperemia and cyanosis of surrounding mucous membrane, presence of fistulous tract with small amount of serous or seropurulent discharge, and by the presence of implantosubgingival space more than 3 millimeters deep. Results of the research and their discussions. Peri-implantitis in Group I was discovered in 2 patients, accounting for 17% of patients from Group I and 7, 4% of the total number of observed patients. In Group II the complications were not detected. Conclusions. Application of the laser puncture in the postoperative treatment of dental implantation has a positive impact on the process of osseous integration and allows reducing the number of complications that has both social (improving the quality of life of patients) and economic (reduction of common dates for the treatment and rehabilitation) effect. Perspectives of further researches. The positive results of the laser puncture as part of complex treatment of postoperative patients for prevention of peri-implantitis will facilitate the reflexotherapeutic effect with treatment-and-prophylactic purpose at all stages of dental implants functioning. 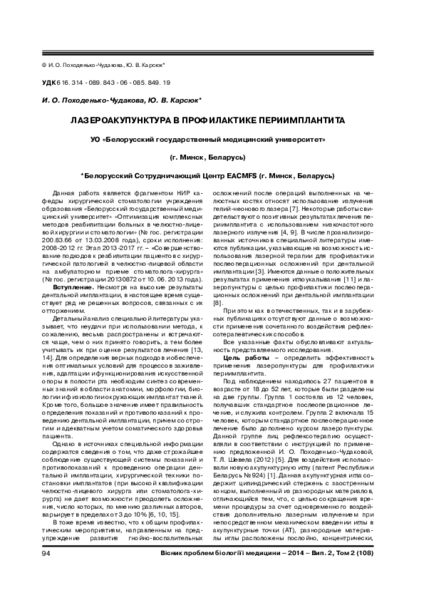