The γ-aminobutyric acid (GABA) is dominant inhibitory neurotransmitter in the CNS. By opening Cl-channels, GABA generally hyperpolarizes the membrane potential, decreases neuronal activity, and reduces intra-cellular Ca2+ of mature neurons. GABA, which is the principal excitatory transmitter in the developing brain, acts as an epigenetic factor to control processes including cell proliferation, neuroblast migration and dendritic maturation. These effects appear to be mediated through a paracrine, diffuse, non-synaptic mode of action that precedes the more focused, rapid mode of operation characteristic of synaptic connections. This sequential operation implies that GABA is used as an informative agent but in a unique context at an early developmental stage. GABA is the first neurotransmitter to become functional in developing networks and provides most of the initial excitatory drive. GA-BA-mediated mechanisms thus have a central role both in early stages This review will examine the roles of GABA, particularly in relation to proliferation, neuronal migration, synapse formation and activity-dependent mechanisms that are essential for network construction. GABA increases the proliferation of cerebellar granule cell precursors. For these actions, GABA functions in association with various trophic factors. In maturing brain, GABA exerts a de-polarizing action related namely to a reverse gradient of Cl-. This transient effect is essentially due to a low expres- sion of the neuronal Cl--extruding K+/ Cl- co-transporter KCC2. There is general agreement that the GABA switch from excitatory to inhibitory action is mediated by upregulation of the cotransporter KCC2, which extrudes Cl- and has delayed expression. GABA has a variety of important functions during maturation. The uniqueness of GABA is epitomized by its early operation–before glutamate synapses are functional – indicating that, at least during a restricted period, GABA provides all the excitatory drive. In addition, the possibly activity dependent shift of GABA actions following upregulation of KCC2 provides a remarkable modulation of the set-point at which GABA will re-sume its classical inhibitory effects. In the adult mammalian brain, GABA – releasing synapses (the principal source of inhibition) and synapses that use glutamate (the principal excitatory transmitter) operate through ionotropic re-ceptor channels that are permeable to anions and cations, respectively. GABA is initially excitatory as a result of a high ([Cl–]i). GABA-releasing and glutamatergic synapses are formed sequentially. There is a primitive network-driven pattern of electrical activity in all developing circuits – the giant depolarizing potentials (GDPs), which are generated in part by the excitatory actions of GABA. This pattern allows the generation of large oscillations of intra-cellular calcium, even in neurons that have few synapses, and an activity dependent modulation of neuronal growth and synapse formation. Later on, once a sufficient density of glutamate and GABA synapses has been generated and inhibition becomes necessary, a chloride-extruding system becomes operative, an event that seems to be ac-tivity dependent. As a result, chloride is efficiently pumped from the intracellular, GABA begins to exert its inhibitory action, and the primitive pattern is replaced by more diverse and elaborate patterns of activity. The main steps of this cascade, including the shift from excitatory to inhibitory actions of GABA, are modulated by neuronal activity. After neuronal trauma, GABA, both synaptically released and exogenously applied, exerted a novel and opposite effect, depolarizing neurons and increasing intracellular Ca2+. So, this story leaves us with more questions than answers. 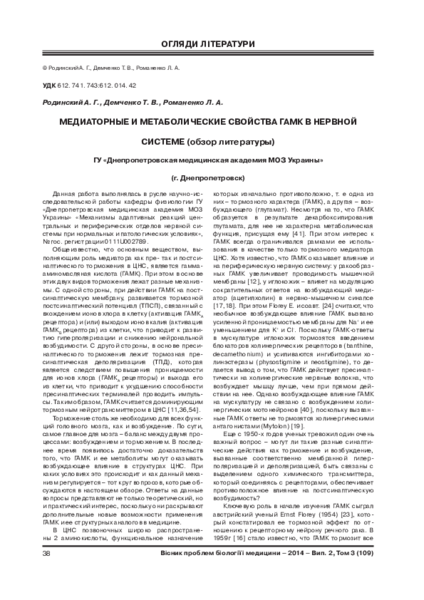