Bulletin of problems biology and medicine / Issue 2 part 3 (109), 2014 / Adhesive System in Restorative Dentistry: Evolution and Prospects
Udod A. A., Sagunova K. I.

For several decades, the adhesion of restorative materials is one of the main objects of study in dentistry. These developments and achievements have had a significant influence on the development of modern restoration techniques. The improvement of adhesive systems allowed move from mechanical retention for the achievement of wich intact and carious hard tissues were remember, to minimally invasive technique of preparation, the basis of wich is a conservative cavity design with the removal of only abnormal hard tissue. Until recently, the development of dental adhesives were introduced by eight generations of bonding systems, which consist differences jf wich consist of the handling of the smear layer. Adhesive systems of I-III generations of today are not used in dental practice. This is due to low rates of traction with hard tooth tissues and instability of this compound. All the generations of adhesive systems can extract the three most popular, in particular adhesives, IV, V and VI generations. These adhesive systems are based on two basic concepts wich provide adhesion to hard dental tissues, «etching + wash» and «self-etching». Generation IV of adhesive systems applied in three steps: etching, priming, bonding. The advantages of these systems include high bond strength to hard tissues of the tooth, which they provide, and the shortcomings – a significant time for such an adhesive preparation. With the advent of Generation V while applying adhesive decreased. This group includes one-bottle adhesives. Their application technique consists of two phases: the total etching hard tissue and applique – bond primer mixture. Despite the good performance of adhesion, these systems can cause postoperative sensitivity. Combining all the stages of the preparation of the adhesive in one and offer versions that reduce the risk of hypersensitivity, manufacturers have introduced self-etching adhesive systems of VI and VII generations. Due to these systems, the time of the adhesive preparation is greatly reduced, but the force of adhesion to hard tissues is lower than that of the IV and V generations. The adhesive systems of VIII generation have become known recently, the so-called «komposit & bond» self-adhesive composites. Their structure includes bonding agent and flowable composite, the use of such materials does not only eliminate the use of phosphoric acid, but the adhesive system, significantly reduce the time and sensitivity of the technique. Composition of adhesive systems is constantly being improved, but clear clinical indications for their study, the degree of «universality», advantages and disadvantages, the optimal polymerization conditions are not fully understood. Thus, the problem of choosing the adhesive system in different clinical situations and maximize the effectiveness of their application remains open. The dental market today offers a rich selection of the various adhesive systems, developed based on different concepts. The ideal adhesive system provide the optimum application technique, high strength and durability of adhesive bonding are it is currently not yet been established . Such issues are relevant and require further study. 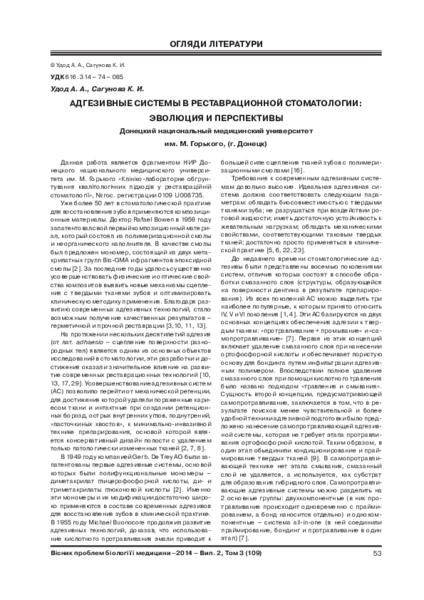