Higher brain functions are determined by the activity of neurohumoral regulatory mechanism. Among the hormones that influence the cognitive activity of the central nervous system (CNS) an important role belongs to thyroid hormones (TH). Due to the maintenance of an adequate level of energy and plastic metabolism of the neuro-glial structures, modulation of neurotransmitter diffusion systems, vegetative cateholamine pressor effect these hormones ensure maintaining the psycho-emotional status of the organism. Despite numerous scientific data about the effects of TH on the cognitive function of the brain, the mechanism of their action remains unclear. One of the most important but controversial aspects of the impact of TH on cognitive function of CNS is the regulation of the activity of the basic inhibitory system of the brain – GABA-ergic transmission. Therefore, the aim of the study was to investigate the peculiarities of spontaneous behavioral activity, processes of spatial memory formation and the role of excitatory and inhibitory amino acids in the cortex of rats under the conditions of thyroid imbalance. The study of spontaneous behavioral activity was conducted with the “open field” technique. The study of spatial memory was performed in eight pointed labyrinth, by Buresh. Determination of the levels of glycine, GABA, glutamate in the neocortex homogenate was performed by chromatographic methods. Hyperthyroid state was modelled by the introduction with food of crushed to powder L-thyroxine tablets for two weeks in doses that were gradually increased. Hypothyroid state was provided by the introduction with food of merkasolil in 10 mg/kg for two weeks. The probability of the modelled states was confirmed by determination of the thyroxine (T4) and thyroid stimulating hormone concentrations in blood plasma in the end of the experiment. The study of spontaneous behavioral activity in rats showed that the excessive levels of TH was accompanied by decrease in the duration of grooming by 37% and defecation boluses by 88% (p <0. 05). Even more significant deficiency was found for emotional activity of animals under the hypothyroid conditions. Time of reflex washings and scratchings decreased by 55%. Studies of acquired food-operant behaviour in 8-pointed labyrinth showed an optimising effect of TH in the formation of spatial memory. When implementing food-operant reactions under the conditions of hyperthyroidism was seen an increase in the number of executed food reflexes by 60% when compaired to control. On the contrary, the state of hypothyroidism was accompanied by reduce in implementation of the reactions by 21%. The study of the concentrations of individual amino acids that act as the excitatory and inhibitory neurotransmitters, in the neocortex of the animals, showed that the contents of glutamic acid did not differ significantly from the control values. In contrast, concentration of the inhibitory neurotransmitter glycine was reduced by 18. 3% in the “hyperthyroidism” group and by 17. 4% in the “hypothyroidism” group with respect to control animals. The most interesting, in our opinion, were data about another inhibitory neurotransmitter – GABA. In rats with low levels of the TH the concentration of this neurotransmitter was 7,2 ± 0,52 µmol/g of tissue, so that as in the control. In contrast, in animals with a high content of TH the amount of GABA in the cerebral cortex was increased by 51. 7% (p <0. 05). This result makes it possible to assume that the improvement of cognitive brain activity, as well as the reduce in emotionality is determined by increased activity of GABA-ergic system of the neocortex. Nowadays it is known that the modulating effect on higher brain functions TH realise through GABA and serotonergic neurotransmitter systems in the CNS, which are known to be its major inhibitory mechanisms. Thus, an improve in spatial memory, engrams of which are formed on the basis of the dominant, involves dominant inhibition. It’s also known the participation of GABAA-receptors in the regulation of the long-term postsynaptic potentiation. Hence, the thyroid mechanism of “feedback” regulation of the activity of the CNS, which involves the activation of GABA-ergic system, may be the underlying mechanism on the spatial memory optimisation. 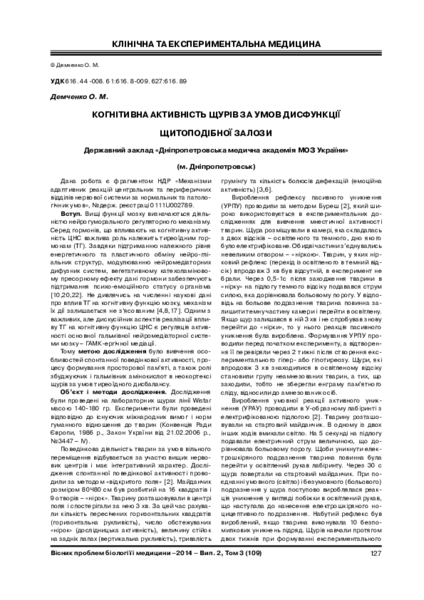