This articles notes that the beginning of esophagus, larynx and trachea are defined as derivatives of oropharynx at the level of the first cervical vertebra, in the bottom oropharynx and the early formation of esophageal-gastric transition occurs in the 4-5 week old embryos. During this period three sections are formed: 1st – distal part of the esophagus; 2nd – part where esophagus merges to the stomach (future cardiac orifice); 3rd – a part of stomach’s cardiac region, which is adjacent to the cardiac orifice. Layers of wall sections of esophageal-gastric transition without clear boundaries transition into each other, identical in structure and entodermal layer of cells surrounded by plump mesenchyme; the aperture of the esophageal-gastric transition looks like a crack (stage of conception). The formation of mucous layer esophageal-gastic transition occurs in the embryos of 5. 5-6. 0 mm PCL, which is represented by a two-layer cubic epithelium with marked basement membrane. The process of physi-ological atresia, formation of epithelial “plug” is activated during the 7-8th week, the recanalization stage during the 9th week, the phase of completion of histogenesis – at the end of the 12th week of intrauterine development. The esophagus is developed from a part of the primary intestinie, which is located caudal to the place of branching of tracheal groove that gives the anlage of the lungs and trachea. The mesenchymal cells that surround the epithelial wall of the esophagus are located circularly, form the mesenchymal membrane which is poorly delimited from the same membrane of the trachea. In the early stages of development of esophageal epithelium in its structure is not different from the epithelium of the trachea, stomach and intestine. In the cytoplasm of cells, the anlage of the esophagus contains a large amount of glycogen, the size of the epithelium cells of the anlage of the esophagus is somewhat higher than the cells of the anlage of respiratory tube. Ahead of the anlages of the respiratory and digestive systems are located the anlages of heart and liver, and behind – the anlages of the cardinal veins, dorsal aorta and vertebral column. Starting from the embryos of 12. 0-13. 0 mm PCL, a solid layer of mesenchymal cells is shown, which has a circular orientation, the beginning of the formation of a circular layer of muscular membrane of esophageal-gastric transition is observed. In the wall of the esophageal-gastric transition three membranes can be revealed: mucous, which presents a multi-cylindrical epithelium, subepithelium layer and muscular one that is formed by mesenchyme that is covered outside by a single layer of cells of mesothelium. The muscular coat is differentiated into circular and longitudinal layers that are separated from the epithelial lining by proper plate of mucous and submucousal layer (stage of histogenesis completion). At this stage of embryogenesis, the transition of stratified squamous epithelium of esophagus into a single-layered cylindrical epithelium of the stomach is ob-served, forming gastric fossa. The proper plate of mucous layer contains simple branched tubular glands (cardiac glands) which are formed by the main, parietal and endocrine cells. The muscular plate of mucous esophageal layer continues into the gastric mucous layer of the stomach, which consists of longitudinally placed bundles of smooth muscular cells that are surrounded by a mesh of elastic fibers. The submucousal layer of esophagus is formed by fibrous connective tissue in which the terminal secretory parts are located in own esophageal glands, which continues into submucousal layer of the stomach. The muscular coat consists of two layers: revealed inner circular and outer longitudinal layer, in between of which the muscle nerve plexus (Auerbach) is located. The serous membrane is formed from the mesothelium with surrounding connective tissue. In prefetuses 61. 0-78. 0 mm PCL in the place of transition of esophagus into the stomach, the proper plate of mucous membrane contains a large amount of cardiac glands which are formed by cubic and prismatic cells. In the cardiac glands endocrine cells are revealed. The excretory ducts of these glands open at the apex of the papillae of the proper plate of mucous mem-brane. Various pathological processes often arise precisely in the places of location of cardiac glands. The muscu-lar plate of mucous membrane in the region of transition of esophagus into the stomach is well defined. The sub-mucousal layer is presented by plump connective tissue containing own esophageal glands which are transported in the stomach into the proper layer of the gastric mucous membrane. In summary, during the prefetal period an active process of transformation occurs, a process of cubic epithelial mucous esophageal–gastric transition from a two-layer cubic (67. 0-68. 0 mm fetus PCL) to a four-cubic (70. 0-78. 0 mm fetus PCL) epithelium. 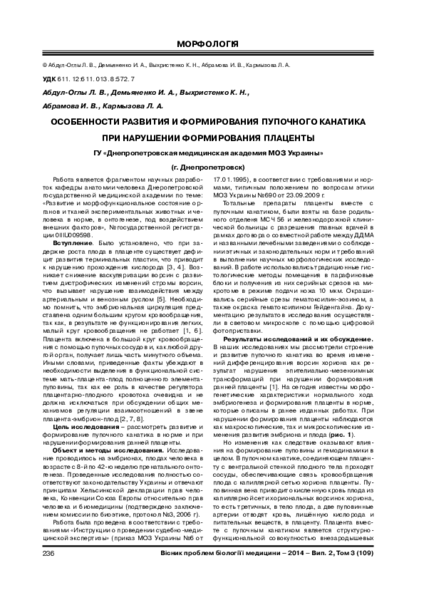