Analysis of Disability as a Result of Cardiovascular Diseases

Introduction. Despite the fact that the modern development of cardiology in Ukraine is characterized by the active implementation of new technologies examination and treatment, unfortunately, there is no positive dynamics of cardiovascular system disease The indicators of morbidity and mortality due to diseases of the cardiovascular system, the prevalence of risk factors caused them in Ukraine are higher than in other countries. Key indicators of disability are due to the increas-ing incidence of the population, deteriorating socio-economic conditions and environmental situation, reducing the availability and care quality. Increasing number of disabled is with declining population and aging. The aim of research is the analyzing the prevalence, incidence and access to primary disability in the Poltava region. Object and methods of research. Analysis of the incidence and prevalence of cardiovascular diseases (CVD) is given according to the analytical and statistical manual book “Regional patterns of health of the people of Ukraine”. Diseases of the circulatory system lead to high levels of morbidity, disability and mortality. According to the NSC “Institute of Cardiology named after academic M. D. Strazhesko” SASS of Ukraine, the rate of prevalence and morbidity due to COD has noticeable variations in different regions of Ukraine, which is as-sociated with the presence of risk factors, social and demographic indicators varied geographically. Analyzing the prevalence and incidence of this disease over the period 2000 2010, it should be noted the total population has increased by 57. 5% and 10. 4% respectively, in the Poltava region the prevalence has increased almost twice (from 34, 229. 4 to 229,4 68,163. 5 per 100 thousand population. In the formation of these parameters the leading role is carried out by hypertension, ischemic heart disease (IHD) and cerebrovascular disease (CVD). Incidence is inextricably related with disability. According to statistics since 2010 the structure of the primary disability of the adult population as a result of COD has been on the first place (24.4%), where the Poltava region (15. 3) is at the top rank place in terms of primary disability. In region among those of working age on the first place there is cardiovascular diseases, its indicator has de-creased in 2013 and is 11. 0 cases per 10 thousand working population against 11.4 in 2012, 12.5 in 2011 and 13.2 in 2010. COD is caused first of all for 46. 1% by cerebrovascular disease, and 27.8% by ischemic heart disease, 6.3% by hypertensive disease. If the high rate was observed in 2012: Khorolsky region – 21.0%, Semenivsky region – 19%, 3, Hlobynskyy region – 17.9%; but in 2013 this rate decreased and was in Khorolsky region -16,3%, Semenivsky region – 10, 7% Hlobynskyy region – 13.3%, but in Khorolsky region has the same, the increased rate is in Zenkovsky region-13, 5-15,0%, in Kobeliatsky region – 12,5-15,5%. The presence of « hidden» disability is related to demographic trends (aging population and migration), social and economic problems in Ukraine nowadays (the possibility of job loss in the presence of temporary or permanent disability), with additional factors that influence on the level of disability among the population (hope for social sup-port, regional specific evaluation criteria for the definition and execution of clinical and experimental diagnosis). Conclusions. Thus, the estimation of initial disability due to COD for 2010-2013 has been done, it has been deter-mined the regions with high levels of disability. COD leads to high levels of morbidity, which is inextricably related with disability in the population of Poltava Region. 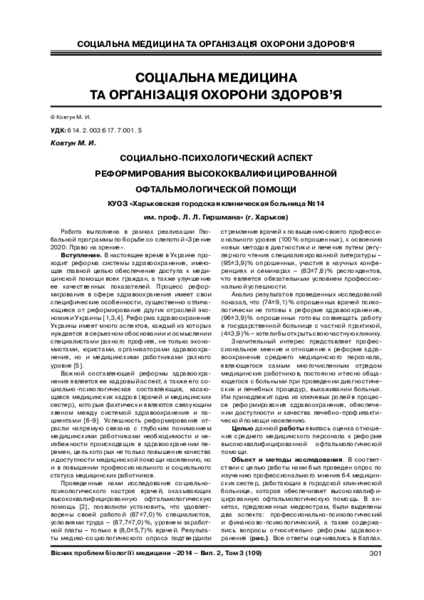