Molecular-Biological Aspects of Oncogenesis and Phenotypes of Gastric Tumor Cells

In 2003 it was officially declared about decoding of human genome. Opinions as for differentiated diagnostics of pretumor processes and gastric cancer are changing. The term “oncogenesis” means interaction of more than two thousand genes through proteins, expressed by them, providing full­grown cellular homeostasis and intercellular communication at each stage of vital activity of organism. Genomics considers integrated study of genes, analysis of their structure and function. Nowadays it is known more than one hundred potential oncogenes, two dozens of tumor suppressors and the same number of tumor­ related genes, involved into cancer development. Activation of, so called, oncogenome is stimulated by mutations, accumulated in these genes, genetic instability or abnormalities of genetic control system. To understand the genesis of phenotype of tumor cells it should be clearly realized that it is a polygenic and mul­ tifactor process. High evolutional stability of genome has been established. Genome stability control system may be conventionally divided into two groups: 1 – repair one, which identify and correct various types of DNA damages; 2 – cell cycle or apoptosis control systems, which normal functioning disables proliferation of cells with various anomalies and genetic disorders. Oncogenes and genes­suppressors of tumor growth take the leading role in carcinogenesis as regulators of cell cycle. Genome’s instability enables accumulation of different mutations in single cell in oncogenes, genes­ suppressors and other genes, resulted in initiation of cell population heterogeneity. Malignant transformation of cells, according to current opinions, appears in accumulation of independent mutations and epigenomic changes, resulted in cell cycle and apoptosis deregulation, immortalization, genetic instability, morphologic disorder and dif­ ferentiation of cells. Mathematical analysis of protein­protein and DNA­protein interactions shows that genome is a nonlinear system. Therefore, changes of its parameters do not fairly lead to major disorders. But in some cases even minor variations of parameters may significantly change characteristics of the entire system. This may lead to three essentially different consequences for cell: 1) cell death, 2) delay or increase of cell proliferation, 3) origination of new phenotype of tumor cell. Cell cycle deregulation is integral and, probably, one of the major characteristics of neoplastic cell. In this way, for example, one of the consequences of growing factors receptors’ binding may be activation of certain set of transcriptional factors and expression of specific genes. Regulation of apoptosis is another important characteristic of protooncogenes and tumor suppressors. p53 tumor suppressor and Bcl­2 protooncogene are the most conventional representatives of such activity, which prod­ uct acts as apoptosis blocker. Due to heterogeneity, each transformed cell may possess its own reference system of regulatory factors. Fur­ thermore, these systems become different, depending on the type of tumor cells. In solid types of cells the number of detected mutations is significantly higher than in leukemia population due to specific characteristics of cytoskel­ eton and elements of cell­cell adhesion. Expression of some markers, along with evaluated degree of tumor differentiation, stage of the process and other clinical characteristics, provides with exacted diagnostics of tumor process, prescribed treatment and identi­ fied prognosis of cancer course. HIF­1 level of transcription, i. e., key factor, initiated the activity of about 30 hypoxia­ inducible genes, plays the important role in the system of oncogenome. 91,5 % of patients with gastric cancer tumor tissue is HIF­1a­positive; at the same time no HIF­1a expression have been detected in cells of mucosa, which is 5­7cm away from tumor’s edge. It is shown that HIF­1a expression correlates between the degree of tumor differentiation and index of pat­ ents’ overall survival. Cells of primary tumor may disseminate due to some genes, identifying realization of metastatic potential of the tumor. Cancer cells may die, transform into inactive state or proliferate in focuses of potential metastases. In such cases it is vital to detect disseminated tumor cells, enabling identification of patients with high risk of recurrence development. One of the most important problems of oncology is detection of tumor cells before their clinical manifestation. Achievements in molecular biology enable identification of separate tumor cells in biological samples. Tumor cells of gastrointestinal tract may be detected by means of extremely sensitive technique, based on polymerase chain reaction (PCR). Sensitivity of PCR–method corresponds to identification of one tumor cell among 105 – 107 normal cells. Techniques of DNA­markers enable timely diagnostics and decision as for adequate mode of treatment in ma­ lignant tumors of various histogenesis. 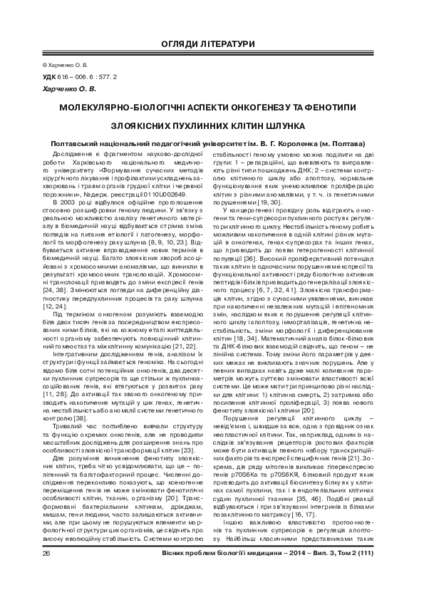