Bulletin of problems biology and medicine / Issue 3 part 2 (111), 2014 / Clinical and Morphological Characteristics of Tyroid Microcarcinomas (Literature Review)
Yakovtsova I. I., Yvahno I. V.

There are more than three thousand new cases of thyroid cancer recorded every year in Ukraine. Incidence of thyroid cancer in Ukraine increased from 2007 to 2011 on averaged by 6.9 % per year (from 5.4 per 100 thousand people in 2007 up to 6.9 in 2011). Particularly high increase of thyroid cancer due to papillary thyroid microcarcinomas. Papillary thyroid microcarcinomas (PTMC) are defined according to the World Health Organisation as small papillary thyroid carcinomas (PTC) less than 10 mm in size. PTMC show variety clinical and morphological evidence, biological behavior, and there is no agreement about the optimal treatment of this tumors. In general, PTMs in comparison with papillary thyroid cancers characterized by less aggressive biological behavior. Distant metastases are detected in the 0.3 – 2.8 % of papillary thyroid microcarcinoma patients, according to some authors – up to 6.2 %. Metastasis to the neck lymph nodes are observed on average in the 10 – 40 % of cases, extrathyroid invasion in 15­30 %, recurrent in 2.4 – 19 %, mortality generally less than 1 %. In the scientific literature a lot of information about high malignant potential of PTMC. N. Wada et al. found lymph node metastases in 69.5 % of gases. A group of Japanese authors revealed recurrences in 40 % of patients older than 55 years. Thus, most researchers suggest that PTMC requires the same clinical management as PTC, including: total thyroidectomy, postoperative radioactive iodine treatment and suppressive therapy. There are also opposite data showing favorable current of PTMC. Y. Ito et al. suggest that surgical treatment should be performed only in cases of tumor localization near nerve recurrent, or in cases with the presence of lymph nodes metastases, and high malignant forms. With the identification of certain clinicopathological parameters, associated with indolent or aggressive tumor behavior, patients may be separated in to risk groups based on these parameters, such as age, gender, size of tumor, cancer extension, and other morphologic parameters. Most reports in the literature show that older patients with PTMC have a worse prognosis. However, some authors found that, in PTM, age was not a significant factor in predicting disease recurrence or survival. Distinguish PTMC less than 0.5 cm and 0.5­1 cm in diameter. There are evidences the presents of lymph node metastases in patients with microcarcinomas less then 2mm. PTMC 0,5 cm metastasize on average in the 3.5 % – 55.7 % of cases, > 0.5 cm in 16 % ­73.7 %; recur – 3.3 % and 14 % respectively. Multiple foci were reported in approximately 30 – 40 % of PTMC. A number of clinical studies showed that patients with more than two foci had a higher recurrence rate, cancer mortality, presence of metastases than those with unifocal PTMC. According to the classification of World Health Organization PTMC subdivided into the following morphological form: classical papillary – 65­99 % of cases, follicular – 9,7­31 %, oncocytic, tall cell variant – 0.8 % [37] and solid. The sclerosing variant has been found in 5–11.7 % of PTMC. The more virulent oncocytic, tall cell and solid variants. The smallest tumors (1­2 mm) often follicular, nonencapsulated, and without fibrosis, suggesting that they may represent the early stages of development. So among the morphological criteria of prognosis in patients with PTM the most important ones are multifocal and bilateral growth, nonencapsulation of the tumor, extrathyroid invasion, vascular invasion, diffuse sclerosing, tallcell, solid, insular variants, and the size greater than 0. 5 cm. However, the diagnosis should include histological and immunohistochemical examination such as: expres­ sion of epithelial­mesenchymal transition markers (E­cadherin, vimentin, MMP), oncogens (BRAF, RAS), VEGF and others. 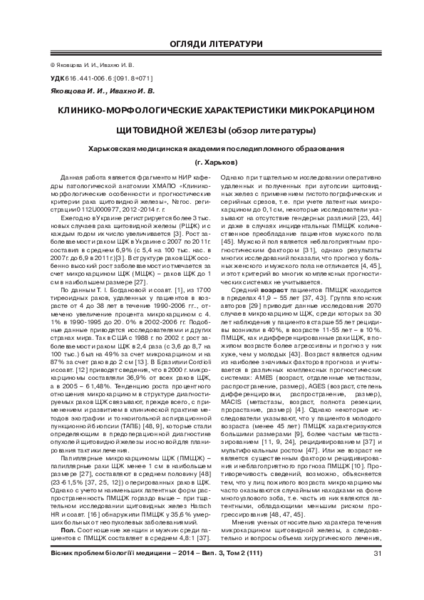