Endothelial Dysfunction and its Regulatory Factors

Endothelial dysfunction (ED) is an imbalance between the production of vasodilating, angioprotect­ ing, antiproliferative factors on the one hand and that of vasoconstrictive, prothrombotic and proliferative factors on the other hand. In different vascular diseases and metabolic disturbances the ability of ED to release relaxing factors reduces, whereas the formation of vasoconstrictive factors maintains or increases, resulting in endothelial dysfunction. An imbalance of NO production against a background of an increased production of reactive forms of oxygen can initiate ED. NO plays the key protective role in the development of coronary atherosclerosis. Its release is potentiated by: circulating hormones, thrombocyte products, histamine, bradykinin, etc. NO prevents pathologi­ cal vasospasm of coronary arteries, inhibits aggregation of thrombocytes and expression of endothelial molecules of adhesion, inhibiting penetration of macrophages. Disruption of the protective function of NO results in the devel­ opment of an inflammatory response with subsequent atherosclerosis. Particularly important for the development of ED is sirtuin 1 (SIRT1), which regulates the activity of eNOS. Its physiological effects are realized via SIRT1­dependent diacetylation of substrates. Representatives of FOXOs branch, which produce their effect on manganese­dependent superoxide dismutase (MnSOD) and expression of the gene of the protein that is responsible for growth arrest and damage of DNA (GADD45), serve as targets for SIRT1. Other SIRT1 substrates are represented by peroxisome proliferator­activated receptors gamma and alpha (PPAR­γ and PPARα) and coactivator 1­alpha (PGC­1α), AMP­activated protein kinase (AMPK), tumour suppressor protein p53, nuclear factor kB (NF­kB) and eNOS. The effects of regulation of these signalling pathways under the influence of SIRT1 result in protection of cardiomyocytes and endothelial cells (EC), balance of lipid metabolism, inhibition of inflammation and formation of atherosclerotic plaques, and delay of cardiac hypertrophy. The activa­ tion of SIRT1 helps to restore eNOS activity in ED, when NO accessibility is restricted, and prevents hypertrophy of vascular smooth muscle cells (SMC), which is considered to be one of accompanying components of atherosclero­ sis. SIRT1 expression also prevents angiotensin II­induced hypertrophy of vascular SMC. Positive effects on SIRT1 metabolism are produced by a hypocaloric diet, resveratrol and cilostazol. Resve­ ratrol stimulates SIRT1 activity, activates eNOS, improves the endothelial function, prevents an elevation in blood pressure and restores the vascular activity of eNOS in animal models of ED. The use of Resveratrol also prevents concentric hypertrophy and cardiac dysfunction. Resveratrol eliminates oxidative stress­induced proliferation of coronary SMC by inhibition of kinase. Cilostazol inhibits oxidative stress­induced damages, increasing SIRT1 expression in human EC in vitro and in vivo. Cilostazol decreases acetylation of p53 via lysine residues in SIRT1 targets. Nevertheless, the protective ef­ fects of SIRT1 can be mediated by other SIRT1 targets, which influence the biology of EC. Cilostazol activates eNOS via cAMP/PKA­ and PI3K/Akt­dependent pathways via induction of eNOS phosphorylation via Ser1177, increases mRNA and expression of SIRT1 protein, which stimulates NO formation under the influence of eNOS. These data confirm that SIRT1­activating drug preparations can produce protective effects on vascular endothelium; this phe­ nomenon can become the subject of further studies 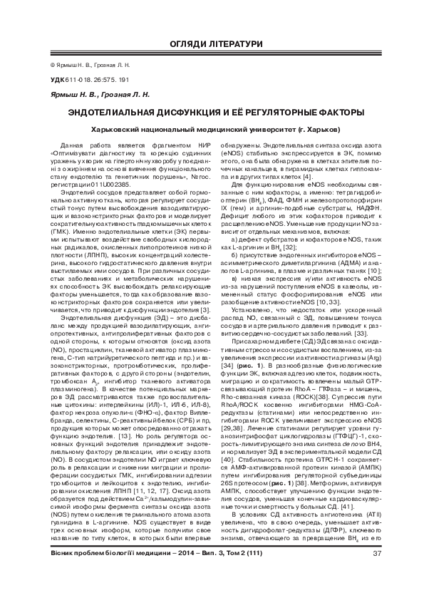