Thyroid cancer is considered one of the most common endocrine malignancy, with a characteristic tendency to increase the frequency of the disease in both industrialized countries and in the Third World. According to medical statistics, Ukraine is not an exception in this list. Given the complexity and depth to the problem, consider only some aspects of carcinogenesis that are being discussed currently in the academic world. Oncogenes – a family of genes that are present in normal body cells and potentially (after mutation) in coopera­ tion with each other neoplastic transformed cells. Oncogenes encode a particular protein, the activity of which is associated with one of the stages of carcinogenesis, that none of oncogenes not able to make the entire process of carcinogenesis, and causes only a stage of neoplastic transformation – immortality, promotion, induction of tumor phenotype, support the transformation of the state and others. The main distinction of oncogenes and antionco­ genes is phenotypical effect – oncogene causes neoplastic transformation and immortality and antioncogen rather inhibits division and causes reversal. Proto­oncogene – normal gene cells that are involved in the regulation of proliferation and differentiation, activation of which can cause neoplastic transformation. Activated proto­oncogene called cellular oncogenes. 4 basic mechanisms of oncogene activation are known: 1) insertional activation (embedded in the cell’s genome viral genes); 2) chromosome translocation sites that are proto­oncogene; 3) amplification of genes; 4) one­point mutations. Tumor growth is the result of an irreversible disruption of the stages of regulation that may arise or increase the activity of the mechanisms of stimulation, or with the loss of activity of inhibitors of cell growth. It is believed that the critical stage of neoplastic transformation is to delay the normal differentiation with excessive stimulation to divi­ sion. So as a result of genetic damage in malignant cells is unregulated expression of growth factors or components of their signaling pathway or inhibition mechanisms of inactivation. The present level of development of medicine leaves no doubt that the leading role in the genesis of neoplastic transformation played a violation of genetic information, and adverse environmental conditions affect the process indirectly contributing to the accumulation of mutations. There are several factors that may increase the likelihood of cancer, but most cancer patients have no obvious risk factors. Due to the discovery proto­oncogene, oncogene and tumor suppressor has made substantial progress in understanding the mechanisms of carcinogenesis, which gained molecular oncology. Thus, conducted studies help us to understand the mechanism of carcinogenesis in the thyroid gland. However, the practical aspects of these studies used small, although implementing them in practical medicine can help not only the primary diagnosis, such as anaplastic and poorly differentiated thyroid cancers, and in the timely diagnosis of distant metastases and pathogenetic treatment, especially locally­advanced and generalized forms of thyroid cancer. 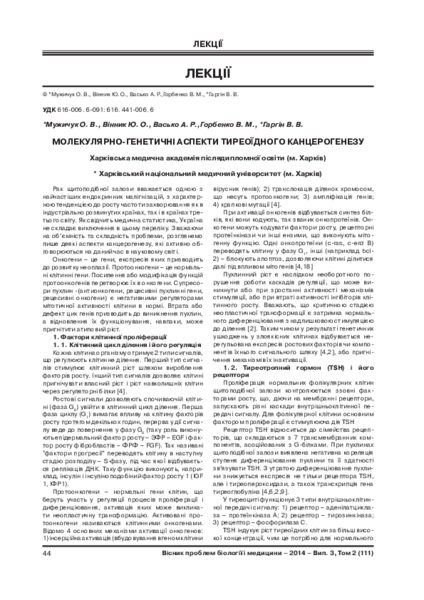