Introduction. Overactive bladder (OAB) is a syndrome characterized by urinary urgency, usually accompanied by frequency and nocturia, with or without urgency urinary incontinence, in absence of urinary tract infection or other obvious pathology. The prevalence of OAB among women is 11,8­16,9 %. The pathogenic role of hormonal imbalance in the genesis of OAB was proved in experimental and clinical studies. According to the results of N. Aizawa (2010) low estrogen level affects the storage function of the bladder in rats. There is an experience of using hormonal replacement therapy and herbal drugs with estrogen action in the treatment of neurogenic bladder dysfunction in women. Objective. To study the hormonal status of women with overactive bladder syndrome. Methods. 107 women with OAB and 29 healthy women were included in the study. Selection of patients was carried out according to the urination diary: more than 8 urinations per in 24 hours, urgency episodes, in the absence of organic pathology of the lower urinary tract and central nervous system, which could be the cause of the above mentioned disorders. The blood levels of luteinizing hormone (LH), follicle­stimulating hormone (FSH), estradiol (E2), progesterone – (PGN) were assessed using ELISA method. Hormonal status of patients was assessed separately: among patients of reproductive age and postmenopausal. Results. In the reproductive period, the average level of E2 was 42,57 ± 10,55 pg / ml and was significantly lower than in the control group – 72,22 ± 17,69 pg / ml (p < 0,05). The blood level of E2 in postmenopausal women in OAB and control groups was not significantly different from each other. In patients with OAB this index was 31,41 ± 9,37 pg / ml, whereas in the control group – 34,90 ± 9,35 pg/ ml. The average level of PGN in the reproductive period (1,94 ± 0,79 pg / ml) were in the range of values of the control group (2,26 ± 0,93 pg / ml). Also there is no difference between average serum concentration of this hormone in investigational and control groups. In the investigational group PGN values were 2,98 ± 0,76 pg / ml, and the average level of this hormone in the control group was 3,37 ± 0,83 pg / ml (p> 0,05). The patients with OAB had a slight increase in the blood level of FSH (5,67 ± 1,58 mIU / l) in relation to the control group (4,97 ± 0,94 mIU /l) but these indexes did not differ significantly (p>0,05). In postmenopausal period the average serum concentration of this hormone in patients with OAB did not differ significantly from the values of the control group. In patients with OAB the FSH level was 61,10 ± 11,99, in the control group – 58,39 ± 11,25 mIU / l. In the reproductive period in patients with OAB the level of LH was 13,67 ± 3,46 mIU / L in women in the control group – 11,80 ± 2,39 mIU / l. (p>0,05). In menopausal patients significant differences between the experimental and control groups were not found. The level of LH in patients with OAB was 51,76 ± 15,32 mIU / L vs 54,02 ± 17,86 mIU / L in the control group. For objectification of the data, the analysis of deviation of levels of studied hormones in patients with OAB and control, according to their reproductive status was performed. The highest incidence of hypooestradiolemia was found in women with OAB in reproductive age – 26.47 %. Only in 4.1 % of menopausal women was registered the shift of E2 level toward smaller values with respect to accepted norms. The PGN level was decreased in 6.67 % of reproductive patients with OAB and in 2.60 % of menopausal patients and had no significant difference between these groups. The levels of FSH and LH in all patients with OAB, regarding to their reproductive status were within the physiological norm (p> 0.05). Conclusions. The results suggest a possible pathogenic role of hypooestrogenemia in the genesis of OAB in women of reproductive age. The investigation of hormonal status in women with OAB is appropriate and will determine further therapeutic tactics considering the identified changes. 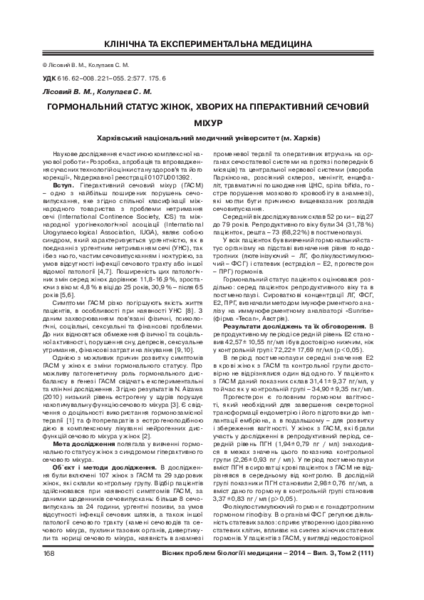