Introduction. Chronic liver diseases, such as cirrhosis, are accompanied by changes in splanch­ nic and systemic circulation. An nitric oxide (NO) has been proposed to play the main role in the pathogenesis of vasodilatation and vascular hypocontractility. NO is formed from the aminoacid L­arginine, due to the action of several isoforms of the enzyme NO synthase (NOS). The endothelial isoform NOS is expressed constitutively in the endothelial and some other cells (including hepatocites) where it produces NO in a continuous manner, albeit in small amounts, in response to physical factors (shear stress) or chemical mediators (vasoconstrictor hormones, for instance). On the contrary, inducible isoform NOS is induced in the vascular wall and different cells by endotoxins and cytokines, among others, and produces big amounts of NO although in a short period of time. This study was designed to determine the role nitric oxide and NOS in pathogenesis of CCl4­induced experimental cirrhosis. Subjects and methods The study was conducted on 24 white male rats weighing 170­210 g weight, which were randomized into 2 groups: control and cirrhosis. Cirrhosis was modeled by the method described Kurabe S. et al., 1991. 50 % solution of carbon tetrachloride was administered orally twice a week for 3 months in dose 2 ml per kg of animal. Nо2 and Nо3 concentrations in blood and liver were determined according Kiselyk I. O., 2001. Deter­ – – minations of eNOS and iNOS levels were performed by ELISA method using Enzyme­linked Immunosorbent Assay Kits for Rat, Uscn, Life Science. Histopathology. A portion of the tissue from ischemic liver lobe was fixed in 10 % neutral­buffered formalin solution for 5 days, embedded in paraffin, and sectioned. The sections were stained with hematoxylin and eosin. Statistical analyses of results were performed by OriginPro Program. All data are expressed as mean ± standart deviation. Differences between experimental groups were analyzed with an unpaired 2­tailed Student t test. All differences were considered statistically significant at a p < 0. 05. Results Histological study of liver micro preparations of experimental animals confirmed the formation of cir­ rhosis in animals. Hepatocytes hepatic lobules were different in shape, some of them do not contain nuclei, in others – were the nucleus with pronounced symptoms of apoptosis. The hepatocytes which regenerate were trapped by fibrous tissue and form nodules. Fibrous tissue increased in amount and destroyed the normal architecture. The reduction of the stable metabolite of nitric oxide nitrite anion in the liver (24.9 %) and its increase (3­fold) in serum was determined in the case of cirrhosis. The level of NO3 in the blood increased by 23.5 % and in the liver it did not change relative to control group. The contents of the endothelial form of NO­synthase in the liver and blood decreased by 38.8 and 58.6 %, inducible NOS enzyme increased by 2.5 and 4.1 times, respectively. The levels of proinflammatory cytokines IL­1β, IL­6 and TNF­α, in experimental cirrhosis were higher than control values at 4.0; 4.1 and 5.8 times. Conclusion Cirrhotic liver disease, which confirmed by the presence of morphologically pronounced is accom­ panied by a decreased endothelial and increased the inducible NO­synthase concentrations, increased levels of nitrite and nitrate anions in the blood and a decrease in NO2 in the liver. Activation nitric oxide metabolism in the blood s is accompanied by increased production of proinflammatory cytokines IL­1β, IL­ 6 and TNF­α. In case of experimental cirrhosis, in our opinion, there is a relative lack of eNOS­ induced nitric oxide in the affected organ and the overall iNOS­stimulated overproduction of NO. Involvement of nitric oxide in the pathogenesis of liver disease suggests the possibility of modulation of NO­synthase to prevent and eliminate the morphological manifestations of this disease. Prospects for further development. Establishing of the nitric oxide role in the pathogenesis of liver cirrhosis jus­ tifies the perspectives of modulators of nitric oxide synthesis as effective hepatoprotective agents. 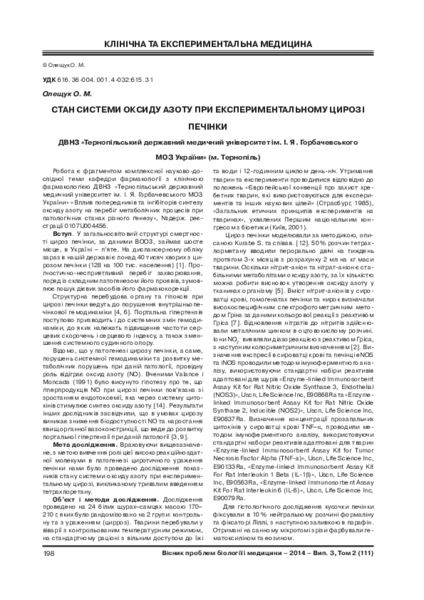