As for now, cholera remains a priority problem in the world. Economics growth and population migration occasionally introduced new pathogenic strains of V. cholerae O1 to southern regions of Ukraine causing cholera outbreaks. They occurred in 1991 in Odesa region, in 1994 in Crimea, in 1995 in Mykolayiv region and in 2011 in Mariupol with about a hundred infected persons. Comparative study of 67 strains of V. cholerae O1 in Ukraine indicated that all of them belong to V. cholerae O1 biovar eltor strain. Molecular­genetic analysis indicated that regardless of the time and place of isolation their genome contained common genes for pathogenicity and persistence – ctxA, ace, zot, rstR, rstC, rtxC, tcpAE, toxR, mshA, wbeт, hapA, hlyA. Results of this study indicate the homogeneity of strains of V. cholerae O1 isolated from infected people in Ukraine during various years. At the same time, 7 strains isolated in 1994 missed several of the mentioned genes: one of the strains lacked rstR, rstC and tcpае genes, four of them lacked both rstR and rstC and two lacked either tcpAE or rstC. There was also one strain isolated in 1995 that had no rstR gene. PCR testing showed that genomes of cholera vibrios mostly contain no rstR or rstC genes, which are part of prophages RS1 and RS2, the flanking core genomic sequence of the vibrio. Conducted study allows to conclude that cholera vibrios can lose genes without serious negative consequences. The strains were contained for about 20 years in laboratory conditions, such stress could easily result in loss or suppression of genes that are not critical for survival. At first vibrio loses genes that are located on prophages – mobile genomic elements which amplify the functions of pathogenic genes. This also could be explained by a point mutation with the change of nucleotide sequence which won’t allow primers to attach to given part of the genome, yet confirmation of this hypothesis requires genome sequencing. Two strains had no tcp gene and this could mean that long­term storage could lead to suppression of a gene that is responsible for adhesive properties of the vibrio. Results of this study allow to assume that being exposed to negative environmental factors under natural conditions, cholera vibrios can lose genes which are not critical for their existence in the given environment, and try to survive as a species. This assumption explains the extreme variability in cholera vibrios. At the same time, favorable climate, occasional passages of cholera vibrios through human body and presence of MGE in the environment creates conditions for activation of the process of gene acquisition similar to that of the Indian region, home of V. cholerae, which causes the formation of cholera vibrios with new properties. In general, climate in Ukraine is adverse for V. cholerae and causes them to gradually lose their virulent properties and transform to avirulent forms or even become extinct. Therefore, the genome of virulent cholera vibrios is unstable, which indicates the possibility of formation of different strains of V. cholerae with new biological properties that can complicate their differentiation. The genetic map of the main pathogenic genes in the genome of V. cholerae created in Ukraine offers new opportunities to study the variability of biological properties of cholera vibrios. 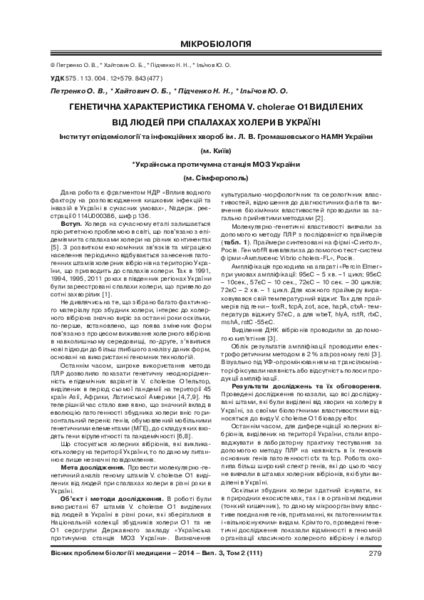