Research was made on 24 mature male, white rats aged 4,5­7,5 months and weighing 130­150 g. Experimental animals were divided into 3 series: in the first series (5 rats) the structure of the pancreas of white rats after 2 weeks of nalbuphine injection were studied, in the 2nd series of experiments (5 rats) the microstructure changes (angioarchitectonics) and pancreas of white rats after 4 weeks course of the experiment was studied; in the 3rd series of experiments (5 rats) the rebuilding of the bloodstream and microstructure of the pancreas of white rats after 6 weeks of nalbuphine injection was found. The control group was made of 9 rats into which the saline were administered. Materials of the research is presented by histological preparation of the pancreas of white rats. For the purpose of the histological examination, the cutted sections of pancreas were stained with hematoxyline and eosine. Preparations were studied out and photographed at the microscope magnification: vol. x8, ca. x15 and vol. x40, ca. x10. For photography of the images of micropreparations the computer system «Aver Media» was used. Introduction of the nalbuphine was performed intramuscularly as follows : I week – 8 mg / kg, II week – 15 mg / kg, III Week – 20 mg / kg, IV Week – 25 mg / kg, V week – 30 mg / kg, VI week – 35 mg / kg. After 2 weeks of nalbuphine injection the first structural changes of the pancreas in the white rats was revealed. Part of the pancreatic acinus has lose sharp contours, apparently due to edema detected by their basement membrane. There is also a slight swelling of the basal membrane of additional ducts. Collagen fibers of the pancreatic caps islets become loosened, the islets have loosed regular round shape. The capillaries between beta­ cells had expanded. In inerlobular ducts and between them, the destructive changes of the epithelial and stromal components occurs. The arterioles and capillaries are dilated, it was revealed a slight swelling of the endothelium, the lumen and the arterioles is not regular, venules are dillated, mild perivascular infiltration of the round cells. In the connective tissue stroma of lymphatic vessels – leucostasis. During 4 weeks of the experiment the increase of the destructive changes of the pancreas was noted. The shape of the most acini had changed, their basement membrane had swelled, loosened, sometimes stratified. The cells of the additional ducts were thinned, mostly lose their shape, basement membrane is thickened. Capsules of pancreatic islets have interruptions, is loosened and swollen, capillaries between the beta­cells are dilated and hyperemic. Epithelium of the interlobular ducts and between them is thinned, it has been revealed protrusion into the lumen of the duct of the epithelium, in the lumen – single desquammated structures, stagnant of the secretions. Productive vasculitis was revealed with obliteration of the lumen of the arterioles, blood separation, leucostasis and leucodiapesis, in the venous component of the bloodstream, which is a sign of inflammation. Perivascular – lymphocytic infiltrates. After 6 weeks of administration of the nalbuphine into experimental animals there is considerable swelling of the connective tissue stroma of the pancreas. Pancreatic acinus appears to be atrophic as a effect of the expanding the connective tissue component. Basement membrane of the pancreatic acini appears to be stratified and discontinuous. The cell layer of the additional ducts is disorganized. Significant reduction in the number of pancreatic islets, they are altered in shape and size, apparently due to destruction of the beta­cells. In the interlobular ducts sometimes thinning of the epithelial plate is revealed, and sometimes – the complete destruction of the epithelial plate down to the basement membrane, which is also mostly fragmented. In the interlobular ducts there are also revealed disorganization of epithelial and connective own plates, signs of leukocyte infiltration and edema. In this period of the experiment there is a distinct smooth muscle hyperplasia and fibrosis of the pancreatic arterioles and perivascular infiltrates. Wall of the arteriole is thickened due to the plasma perfussion, sclerosis and hyalinosis. The lumen of the hemomicrocirculation of the bloodstream is loosing the correct form. The walls of the capillaries and venules are deformed. 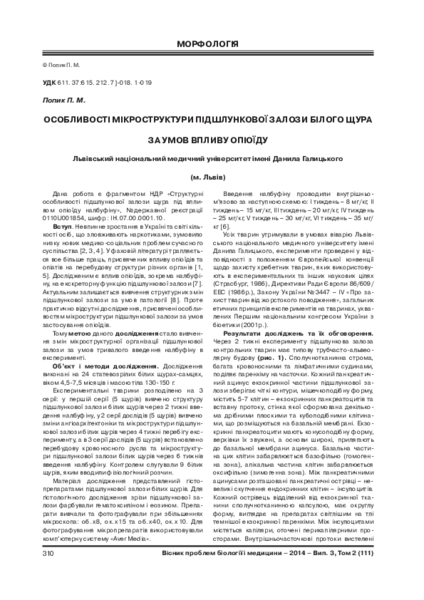