Background. It is estimated that 50 % of all patients presenting with signs and symptoms of heart fail- ure (HF) suffer from HF with preserved ejection fraction (HFpEF). Within the past decades the relative proportion of patients with HFpEF compared with those with HF with reduced ejection fraction (HFrEF) has increased, suggesting an incremental importance of the disease. Patients with HFpEF have several differences in clinical demographics when compared with patients with HFrEF: the typical phenotype is an older, obese female. Galectin-3 is a member of the galectin family involved in numerous hysiological and pathological processes some of which, inflammation and fibrosis, are pivotal contributing pathophysiological mechanisms to the development and progression of HF. Recently, changes in galectin-3 over time were shown to have an important prognostic value in HF patients, with in- creases in galectin-3 independently associated with an increased risk of all-cause mortality and HF hospitalizations. Purpose. To investigate the levels of serum galectin -3 (sGal- 3) in heart failure with preserved ejection function patients (HFpEF) with and without type 2 diabetes mellitus (T2DM). Methods. Seventy-three patients (39 males and 34 females; mean age 60.1 ± 10. 4 years) with HFpEF of isch- emic genesis with and without concomitant T2DM were examined. The sGal3 and insulin were measured in serum by ELISA, according to manufacturer’s instructions. HOmeostasis Model Assessment (HOMA) index was calculated as a measure of IR at fasting state (IR = fasting glucose Ч fasting insulin/22.5), after what patients were divided into three groups: 42 patients with HFpEF and T2DM, 31 patients with HFpEF without T2DM and 11 patients without HFpEF and T2DM as control group. The echocardiographics parameters (left ventricular end-diastolic and sys- tolic volume (LVEDV and LVESV), inter ventricular septum fractional thickening (IVSFT), left ventricle posterior wall fraction thickening (LVPWFS), left ventricular ejection fraction (LVEF), E/A ratio) were measured with M- and B- mode echocardiography using Ultrasound’s Vivid Three with a 2.5-MHz probe (Japan) and calculated following the American Guidelines of Echocardiography Society. Continuous variables are expressed as median (25th, 75th percentile). Spearman’s correlation analysis and Kruskal-Wallis test were used. All statistical tests were 2-tailed, and p < 0.05 was considered statistically significant. Results and Conclusions. IR was diagnosed in 30 (71.4 %) patients without a history of diabetes. The obtained results showed that Gal-3 levels are increased in patients with heart failure with preserved ejection fraction in both patients groups with and without T2DM. However, in the group with and without T2DM the level of sGal3 was sig- nificantly higher compared to the control group (р < 0.006 and р < 0.0001, respectively), while in diabetic patients, the concentration of sGal -3 was less than in non-diabetic patients, but these differences were not significant. The association between sGal -3 level and the severity of diastolic dysfunction and systolic blood pressure (SBP) were established; with increasing the sGal-3 level the SBP gets increased, but the ratio of E/A gets decreased (r = +0,37, p < 0.05 and r = -0.37, p < 0.05, respectively). When analyzing the relationships sGal-3 levels with carbohydrate me- tabolism parameters the positive correlation between sGal-3 level and serum glucose (r = +0.37; p < 0.05), insulin (r = +0.33; p < 0.05) and index HOMA (r = +0.36; p < 0.05) were found in the group of patients without history of T2DM. 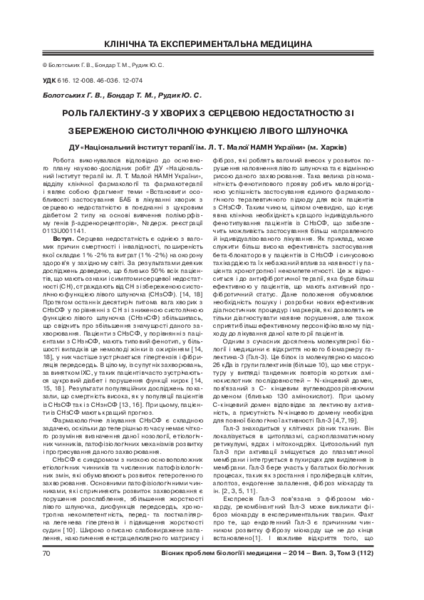