Bulletin of problems biology and medicine / Issue 3 part 3 (112), 2014 / Features of NO-Synthase Oxidative System and State of L-Arginine Metabolism in Patients with Gastrocancerogenesis and their Prognostic Significance
Vasylyeva I. M., Shevchenko E. A.,Vynnik Yu. A., Zhukov V. I., Polishchuk T. V.

NO-synthase oxidative system plays a universal role of many physiological functions of the cardio- vascular, central nervous, immune, muscular, respiratory, digestive systems. NO is responsible for vascular tone, intercellular communication, modulation of neurotransmission, immune toxicity level, the secretion of hormones, neurotransmitters, providing current conditions of physiological hemostasis. An increase in reactive oxygen species (ROS) quantity in the cell can transform effects of NO from protective into cytotoxic. It can occur not only due to in- duction of NO-synthase by endotoxins, but also lack of thiols in cells and elevation of ROS that can lead to decrease in protein nitrosylation. Features of NO-synthase oxidative system and some metabolites of L-arginine metabolism in patients with gastrocancerogenesis and their prognostic significance were studied. Sixty one patients with gas- tric adenocarcinoma between the ages of 43 to 68 years, who were treated at the Kharkov Regional Oncologic Cen- ter, underwent clinical examination. The second stage of gastrocancerogenesis was established in 19 patients (11 males, 8 females), the third stage in 22 patients (13 males, 9 females), the fourth stage in 20 patients (9 males, 11 females) using clinical, laboratory, instrumental and histo-morphological methods. The control comparative group consisted of healthy individuals between the ages of 45 to 65 years (8 males, 6 females). All investigations were per- formed in the first day after admission of patients to the pathogenetic therapy. The program of investigation includ- ed the study of NO-synthase oxidative system and metabolism of L-arginine metabolites. Derivatives of nitric acid oxidation products – nitrites, nitrates, S-nitrosothiols and activity of eNOS and iNOS were determined in the blood serum of both patients and healthy individuals. The state of oxidative NO-synthase system and some metabolites of L-arginine metabolism and their prognostic significance were studied in patients with gastrocancerogenesis. The results of studying the state of NO-synthase oxidative system showed increase in serum ammonia, nitrites, nitrates, S-nitrosothiols, L-citrulline, activity of eNOS and iNOS with decrease in L-arginine and ornithine levels in patients with gastric adenocarcinoma. Patients with gastric cancer had increased activity of the enzyme of ornithine decarboxylation – ornithine decarboxylase and decrease in plasma putrescine, spermidine and spermine levels. The study of NO-synthase oxidative system showed the elevation of NO metabolites in blood serum. Activation of this system and accumulation of toxic products were observed in almost all cases in patients on more than 100 % compared to control group. Such results were confirmed by high levels of nitrites, nitrates, S-nitrosothiols and ammonia. The concentration of nitrites, nitrates, S-nitrosothiols in patients with IV stage of gastrocancerogenesis was correspondingly 2.1, 2.4 and 4.3 times higher compared to control group. Results confirmed that patients with gastric cancer had activated free radical processes, activated NO-synthase oxidative system and increased activity of ornithine decarboxylase that can be considered as an important pathogenetic factor of gastrocancerogenesis development. The study of NO-synthase oxidative system in patients with gastric adenocarcinoma revealed an acti- vation of free radical processes, accumulation of high amount of reactionable molecules, depression of antioxidant system, which prognostic index can be the level of methemoglobin in blood. The content of hemoglobin in blood and ammonia in blood serum has the high correlation level with the severity of the disease and it reflects the stage of endogenic intoxication. The presence of low ornithine level in blood plasma may serve as a prognostic criterion of early diagnostic of gastro-intestinal tract tumors and its low level is observed due to decreased activity of ornithine decarboxylase. 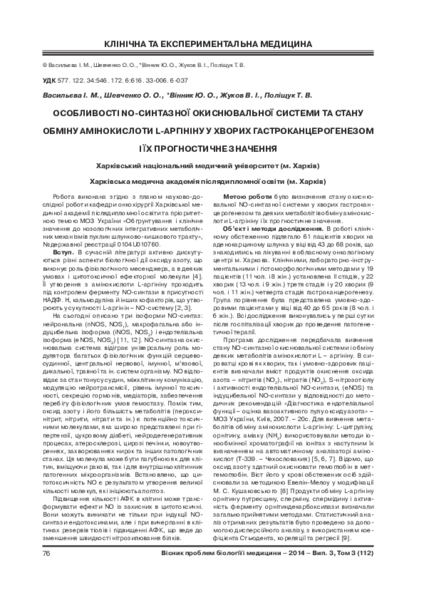