Screening tests of the effect of derivatives of succinamine acids on functional state of central ner- vous system have been carried out. The paper is made in compliance with scientific research, carried out by National University of Pharmacy, related to the problem of “Production of New Medications” (State Registration № 0198U007008). The purpose of research was to study the effect of new derivatives of succinamine acids on the aethaminalum- natrium sleep time of white rats. Chemical compounds, derivatives of succinamine acids, synthesized, for the first time, at the Department of Pharmaceutical Analysis of National University of Pharmacy have been analysed and provided for their pharma- ceutical activity testing. The substances are of white, pink, bluish crystalline substance, soluble in hydroxide water solutions, alcohol, dioxane, dimethyl formamide and other organic solvents. The structure of such derivatives is verified by the current physical-chemical methods of elemental analysis, ultraviolet-, infrared-, PMR- and mass-spectrometry, counter synthesis, and purity of synthesized substances was monitored by the method of thin-layer chromatography. Tests have been carried out on Wistar white rats of 150-220 g body weight, 7 rodents per set. The analysis of neurotropic activity of new compounds has been carried out according to the barbiturate interac- tion test. Activity of tested compounds has been compared with the activity of conventional drugs, i. e., aminazine and caffeine and sodium benzoate. The obtained experimental data show that the majority of substances prolong the time of barbiturate narcot- ic sleep. Among the analyzed compounds in the series of derivatives of 3,5-dihalogen-4-aminobenzenesulfonil succinamine acids most substances are of deprivation effect, prolonging the time of aethaminalum-natrium sleep at the average of 5-128,5 %. Substances, containing 3,5-dichlor-4-amine radical, are of less prolonged effect of barbiturates. Among salts in the series of derivatives of 3,5-dichlor-4-aminobenzenesulfonil succinamine acids, the 39th and 41st compounds decrease the time of aethaminalum-natrium sleep in white rats at the average of 14-28 %. Double ammonium salt of 3,5-dichlor-4-aminobenzenesulfonil succinamine acids has pronounced neuroleptic properties, which in doze of 35,0 mg/kg potentiates the effect of aethaminalum-natrium at the average of 50,4 %. The data, obtained during the study of the effect of derivatives of succinamine acids on the functional state of cen- tral nervous system according to the barbiturate interaction test, show that compounds, containing 2 atoms of bro- mine in the 3,5th position, and propilide substitution and hydrogen in the 4th position, have pronounced deprivation activity, and administration of 3,5- dichlor-4-aminobenzenesulfonil succinamine acid of isopropylammine radical facilitates origination of analeptic properties. Among all analyzed substances, the 26th and 38th compounds had the most pronounced deprivation effect, which is greater than similar effect of aminazine. The 41st compopound is of analeptic properties, as compared with caffeine and sodium benzoate. It can be concluded that such compounds may serve as an interesting object for further profound pre-clinical study. 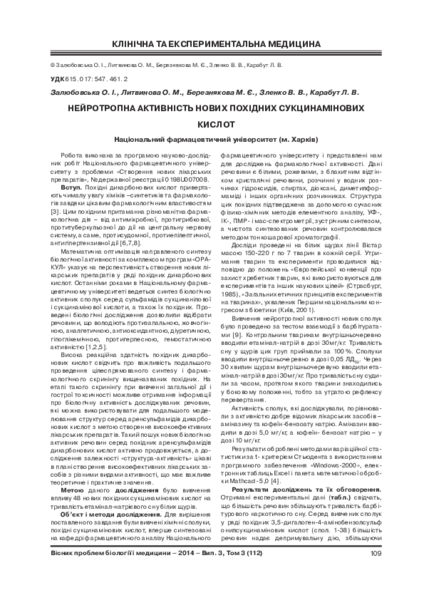