A special role in several markers of endothelial dysfunction is given to the violation of the balance between vasodilator (prostacyclin, nitric oxide) and vasoconstrictive agents (endothelin-1, thromboxane). Numerous studies have shown that nitric oxide plays the most significant role in the formation and ensuring low resistance to feto-maternal-placental blood circulation, which is a necessary condition for the adequate development of blood circulation during pregnancy. Is that changes NO production is one of the main mechanisms in the process of late gestosis, and cause disorders uterine-placental circulation and intrauterine growth retardation. At the present stage of development of obstetrics there are many studies that reveal trigger role of nitric oxide in the formation of the pathogenetic processes in cause the gestosis, however, the data remain contradictions. The level of end-products of nitrites and nitrates of blood plasma at gestosis according to different authors can be elevated, unchanged, or reduced. The authors are unanimous in their opinion nitric oxide is the chemical substance through which mediated the implementation hemo-vascular homeostasis – functional equilibrium rheological status of blood and vascular tone, the violation of which underlies the progression of preeclampsia. Given the heterogeneity of the data existing literature, we have conducted their own study. Studied changes of the concentration of nitric oxide and the amount of blood circulating of desquamating endo- thelial cells in pregnant women with varying degrees of pre-eclampsia during the period of gestation. Assessment of the synthesis nitrogen oxide in vascular endothelial conducted by determining the total amount of nitrates and nitrites. As a token of damage of endothelium in parallel there were detected circulating endothelial cells in peripheral blood and their calculation by the method of J. Hladovec. Both the study was conducted 30 pregnant women in the period of 6-8, 16-18 and 32-34 weeks of pregnan- cy. 20 of them in later pregnancy had phenomenon of pre-eclampsia (group I). In retrospect, the patients in this group were merged into subgroups according to the criterion of severity of gestosis development. With 10 preg- nant women had pre-eclampsia mild and moderate; other 10 pregnant – severe preeclampsia. The control group included 10 healthy women, who had no symptoms of pre-eclampsia during pregnancy. The revealed changes of the investigated markers indicate the development of endotheliosis and endothelial dysfunction in women with preeclampsia, time of occurrence and severity of which are in accordance with the se- verity of the gestosis. The development of endothelial dysfunction begins a gradual decrease in the production of nitric oxide. This is evidenced by the fact that, while retaining the general tendency to increase relative to the baseline in early preg- nancy, the total amount of nitrogen metabolites there are still significantly lower laid for the corresponding period of the values recorded in the control group. In women with mild and severe preeclampsia expressive changes fixed the third study (32-34 weeks), while in severe pre-eclampsia deficiency of nitric oxide validly expressed already in the second trimester. As a result, this leads to a natural increase vessels contracrion activity and subsequent structural-metabolic exhaustion of endothe- lium, which is manifested death and desquamation of the cells. The results of this work indicate the need for further research to improve methods of forecasting, treatment, and prevention of pre-eclampsia. 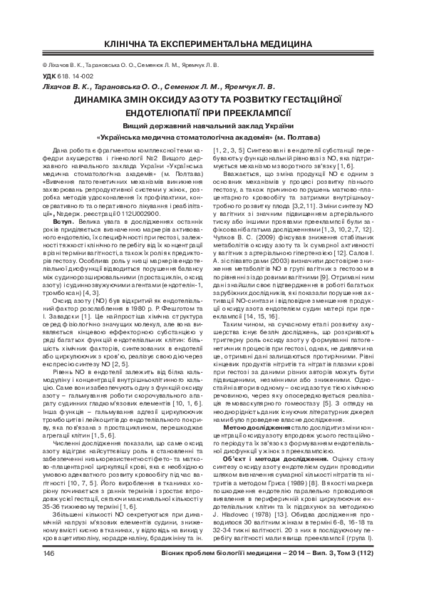