Influence of Irbesartan, Angiolin, its Cooperation on the Fatty Acids Content in Rats Blood Plasma during Arterial Hypertension

Arterial hypertension is one of the most serious disease of cardio-vascular system that causes cardiovascular, cerebrovascular diseases and mortality, leads to considerable complications of various organs and systems of the body, and causes significant medical, social problems. Angiotensine II blockers receptors prevent activation of the renin-angiotensin system and development of pathological changes in the cardiovascular system and kidneys. Irbesartan is attracted attention of clinicians, because it has pronounced antihypertensive activity and produces partial repayment of cardiorenal syndrome. In the modern view of hypertension treatment should lead not only to lower blood pressure, but also to prevent the negative changes in the target organs. To solve this problem is possible only through metabolite drugs, which do not effect the antihypertensive efficacy, but contribute to the restoration of metabolism and structure of the myocardium. Such combination by application irbesartan with angiolin, that refers to cardioprotectors, restores the structure of the endothelium and prevents the narrowing of blood vessels and increasing blood pressure. The feasibility of introducing irbesartan with angiolin in hypertension can be found in the determination of their influence on fatty acid composition of lipids. Research methods. The experiments were conducted on 35 rats HSIAH with spontaneously genetically arterial hypertension (systolic pressure 170-180 mm Hg) and control normotensive rats mass 180-210. The experiment was carried out in 5 groups of animals: the intact animals, hypertensive animals (SAG), angiolin treatment (30 mg/kg), irbesartan treatment (50 mg/kg), irbesartan in combination with angiolin treatment (50 mg/ kg+30 mg/kg). The drugs were administered intragastrically for 3 months. Animals have been killed under chloride- urethane anesthesia. The preparation of biological material and gas chromatographic analysis of fatty acid composition of plasma lipids were conducted by the known method . Gas chromatographic analysis of the spectrum of the LCD lipids carried out on gas chromatographs series of “Color-500” (CJSC “Color”, Russia) under isothermal conditions with flame-ionizing detector. Quantitative estimation of the spectrum of the LCD lipids conducted by the method of regulation by measuring the peak areas methylated derivatives LCD and determine their composition in percent ( %). In the spectrum of the LCD lipids were determined saturated C14:0 – myristic, C15:0 – pentodecane, C16:0 – palmitic, C17:0 – margarine, C18:0 – stearic and unsaturated, polyunsaturated C18:1 – oleic, C18:2 – linoleic, C18:3 – linolenic, C20:4 – arachidonic fatty acids. In experiments on rats with spontaneous arterial hypertension it is stated lowering in blood plasma of palmitic, stearic acids, saturated fatty acids content and increasing the level of arachidonic acid, the amount of unsaturated and polyunsaturated fatty acids. Angiolin, which has antioxidant properties, increases level of saturated fatty acids (myristic, palmitic, stearic), the myristic acid content exceeds the index of the intact animals. Normalization of the content of arachidonic acid after the angiolin introduction is proved the stability of the redox and energetic processes. Angiolin preventing changes of unsaturated fatty acids, improves synthesis of eicosanoids, helps to normalize the composition of membrane phospholipids. Irbesartan has the lower effect in these data. The combination of irbesartan with angiolin has most prominent influence on the content of saturated, unsaturated and polyunsaturated fatty acids. 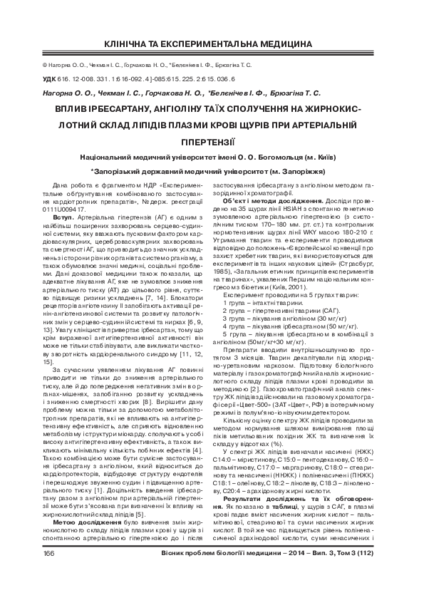