Often doctors meet with patients who have a complaint of fatigue, irritability, depressed mood, fatigue, loss of memory and attention, sleeping disorders, etc. These nonspecific symptoms may be early signs of chronic liver disease. I would particularly like to pay the doctor’s attention to liver disorders caused with using medicaments. Today we know more than a thousand names of drugs, leading to the development of drug-induced hepatitis. According to the literature, the frequency of drug hepatitis ranges from 1 % to 28 % of all side effects associated with drug therapy. Toxicity of drugs increasing during using two – three drugs, and while taking six or more medicines toxic liver damage probability increases to 80 %. Because the liver plays a vital role in the metabolism of chemicals in the human body, the doctor should understand that any drug under certain conditions can cause abnormal liver function. Today information about hepatotoxic effects of many drugs constantly growing, so the protection of the liver when taking medicines is particularly important. Quite often, abnormal liver function can occur under these conditions: 1) incorrect use of drugs (in excess of one-time and / or course doses, no dose adjustments in patients with renal or hepatic insufficiency, especially when taking over 2-3 drugs simultaneously (polypharmacy); 2) uncontrolled self-administration by the patient of many groups of drugs wich don’t need prescription (due to self-medication, aggressive advertising ), including the use herbal medicines and dietary supplements without consulting your doctor; 3) insufficient time at the doctor for individual work with each patient and the lack of deep knowledge about the side effects and interactions of drugs, especially when both are receiving; 4) increasing the number of accompanying diseases of older people leading to an increase in the number of appointments drugs in gerontological practice and increased stress on the liver in these patients. Changing the sensitivity to drugs can occur depending on the mode of administration (tetracycline) and interaction of drugs (several antibiotics potentiate hepatotoxicity), as well as the age, sex and other factors. It is known that young people have increased sensitivity to acetylsalicylic and valproic acid, and the elderly – to isoniazid, halothane, paracetamol. The retrospective epidemiological studies based on the analysis of databases help to establish causal link between the occurrence of hepatic lesions and receiving help drugs. Over the past 10 years the prevalence of drug liver disease has grown vastly. But today there are no specific markers to detect drugs that causes difficulty in establishing a connection with the acquisition liver disease of a particular drug. More often this relationship supposed by doctor as clinical, biochemical and morphological picture of liver dysfunction when taking drugs in most cases does not differ from similar diseases of other etiologies (acute or chronic hepatitis, acute or chronic cholestatic disorders, alcoholic liver disease, etc . etc.). In clinical practice, it is necessary either to avoid hepatotoxic drugs when possible alternative appointment (other) drugs, or observe adequate protection of the liver. For more accurate establishing a causal relationship to drug receiving and liver damage developed several scales, among which the most widely used in manufacturers and regulatory agencies received scale RUCAM (Roussel Uclaf Causality Assessment Method). To study the clinical, genetic, immunological and other risk factors for liver disease in the United States was created a network of medicinal liver disease (Drug-Induced Liver Injury Network), studying improved methods of determining the causal link between receiving drugs and the emergence of pathology of the liver. Hepatotoxicity in recent decades is the main reason for withdrawal drugs from the market and changes in the instructions for medical use. The most important condition of such a decision is benefit / risk ratio. Among the most dangerous in the incidence of hepatotoxicity include the following groups of drugs: non-steroidal anti-inflammatory drugs, anti-tumor antibiotics, neurotropic drugs for narcosis. As a group of drugs often used in clinical practice have a high risk of toxic effects on the liver, we believe particularly important for doctors to focus on this type of undesirable side reactions of drugs. 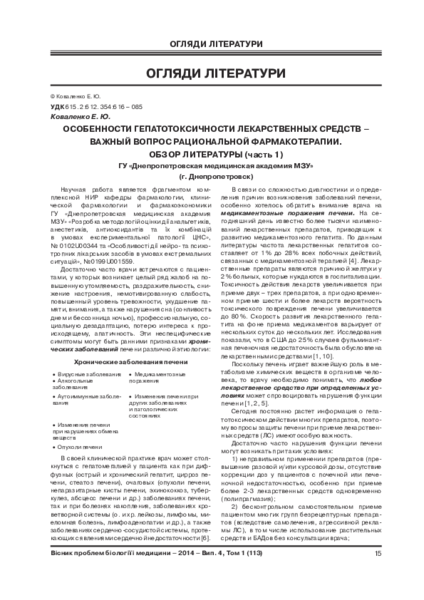