Bulletin of problems biology and medicine / Issue 4 part 1 (113), 2014 / Role of Immunotherapy in Patients with Multiple Sclerosis in Practice Family Doctor
Nefedov A. A., Mamchur V. I., Korsunska A. I., Kalbus А. I.

Multiple sclerosis (MS) – the actual problem of modern neuroscience because of the high morbidity, high prevalence, significant disability patients predominantly young (working-age) children. In recent decades, the incidence and prevalence of specified nosology is increasing in our country. The modern concept of treatment of MS includes three components: treatment of exacerbation (attack); therapy, modifying the disease; symptomatic treatment. For the treatment of exacerbations today in most developed countries use as methylprednisolone pulse therapy. The primary treatment of MS should consider modifying therapy. The first drug to treat this type was in- troduced in 1993 – interferon 1β. From this time picture of the PC changed dramatically – this disease is no longer a sentence and the number of study drugs for the treatment of MS began to increase exponentially According to modern concepts, are modifying treatment is reduced to suppress the autoimmune process underlying the patho- genesis of MS. Several clinical studies demonstrated the high efficiency of this type of treatment in the early stages, which reduces the occurrence of secondary phase progression. This is due to the decrease inflammation (autoim- mune nature) during the disease on the one hand, and the growth processes of neurodegeneration – the other. Now to the first-line treatment of MS in Europe include interferon β and hlatyramer acetate. The mechanism of action of interferon β is still not fully understood. The use of this group of drugs began in an era when the PC was associated with a viral etiology. Despite the large number of studies since their mechanism of action is not well understood. Interferons belong to the β spectrum immunomodulator through their actions – effects on antigen presentation, T cell proliferation, expression of cytokines and chemokines. Interferons β in the European Union approved for use in clinically isolated syndrome, relapsing-remitting and secondary-progressive MS. For drugs as the first line refers hlatyramer acetate, which is used daily subcutaneously. In preparation included a pool of four amino acids – tyro- sine, glutamate, alanine, lysine. Initially the drug was synthesized to mimic the properties entsefality myelin basic protein. At the same time, a number of experimental studies have shown that hlatyramer acetate affects the dif- ferentiation of T cells. This drug is approved for treatment of relapsing-remitting MS, clinically isolated syndrome. A new era in the study and treatment of MS is the use of monoclonal antibodies. The first drug of this group, approved in Western Europe and the United States, was natalizumab. The action is aimed at the blockade of the antigen VLA – 4, resulting in inhibition of lymphocyte migration through the blood-brain barrier into the CNS. Given the safety profile natalizumab, it is prescribed in patients with highly active relapsing-remitting MS, the use of basic treatment which proved ineffective. By the second-line drugs also include mitoxantrone – a drug that was designed as an antitumor agent. The first oral treatment for MS became finholimod – a drug that is used for the treatment of relapsing-remitting MS. In the near future we expect completion of clinical studies on the efficacy and safety teriflu- nomid, lakvinimod, daklizumab for the treatment of relapsing remitting MS. In the near future we expect completion of clinical studies on the efficacy and safety teriflunomid, lakvinimod, daklizumab for the treatment of relapsing remitting MS. Thus, the concept now clearly formed the treatment of MS. Unfortunately, not all drugs are available to patients in Ukraine, and their cost limits their use. Given the pace of neuroscience over the past two decades, probably in the near future, the PC will cease to be so terrible disease, and patients will find a way to live a full life. 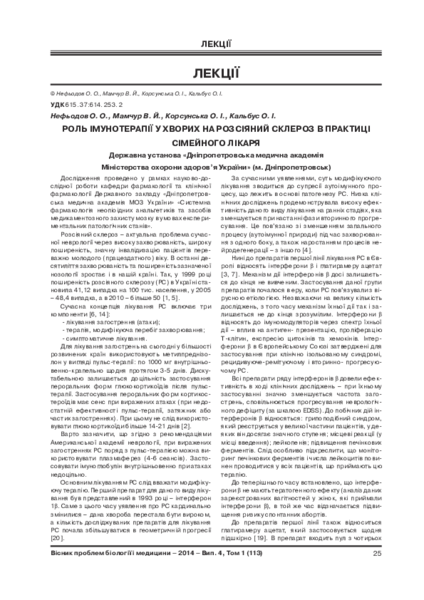