Aneurysm of blood vessels is chronic degenerative disease with development of life threatening com- plications. The official statistics confirm increase of morbidity from aneurysm of blood vessels. In the Great Britain rupture aneurysm of blood vessels is considered as reason of death 10 thousand people per year. The level of mortality from ruptures aneurysm of brain blood vessels is still high. It is due to difficulties of early diagnostics this disease and insufficient results of therapy ruptures. Some questions of treatment aneurysm blood vessels is still unsolved, such as problem of treatment lesser aneurysm with diameter less than 5 cm and the question about development optimal tactics of treatment uncompli- cated forms of aneurysm brain blood vessels. In spite of treatment aneurydm, a lot of technical questions is still unsolved, such as technic of proximal anasto- mosis of thin wall aneurysm, the choise of method revascularization limbs. The real mortality rate from ruptures, including people who die at homeor in the way to the hospital is approxi- mately 90 %. Despite of a large amount publications, dedicated the problem of treatment ruptures aneurysm, optimal tactic is still not developed. The question about intraoperetive technics is still unsolved. The optimal operation technic must be subordinated motto «quickly and simple». Necessary is also technic simplification with the purpose that surgeon with medium level will be able to accomplish the operation without injury other blood vessels. The postoperative complications quantity from rupture of aneurysm brain blood vessels is approximately 50-70 % among patients who have survived. In spite of high amount of publications about factors that predict morbidity patients with rupture aneurysm brain blood vessels, we still do not know who must be refused in operation. There are inborn and acquired kinds of aneurysm. Inborn aneurysm appears in patients who have aorta wall dis- eases. Acquired aneurysm appears in consequence of non-inflammatory diseases (atherosclerisis, postoperative and traumatic aneurysm) and inflammatory diseases. The aneurysm of thoracal part of aorta is associated with degenerative changes of middle coul of aortal reticle. Analysing aneurysm is due to intima’s burstling and aortic dissection that penetrates between intima and muscular layer. The aneurysm of abdominal aorta appears in consequence of atherosclerosis. Arteriovenous aneurysm – pathologyc anasthomosis between vein and artery. Anasthomosys between artery and vein can exist with formation aneurysmatic sack or without him. Aneurysm of the ytart develops past vast myocardial infection. This article discusses the relevance of such pathology as aneurysm of blood vessels, its prevalence, risk assessment, postoperative mortality. Also recorded etiological aspects and pathogenesis of development options for the aneurysm and its localization. Particular attention is given to the the modeling capabilities of aneurysms in animals given as consideration for the older models of aneurysms, since 1958, made by Nesterov V. S. in dogs, to more new models made by smaller animals. A model made by Research Institute in Helsinki, Finland, under the leadership of Johan Marjamaa, which was modeled by transplanting a graft of the thoracic aorta in donor’s rat to the abdominal aorta of the recipient rat with aneurysm formation in this area. Also invited to consider other approaches to aneurysm formation : by local destruction of the medial layer of the blood vessel using a fine needle ( insulin ) syringe is injected directly into media, which is leading to resistance of blood pressure, which leads to further aneurysm formation in this portion of blood vessel. In conclusion, consideration of problems and unresolved issues with respect to the modeling of aneurysms in animals. 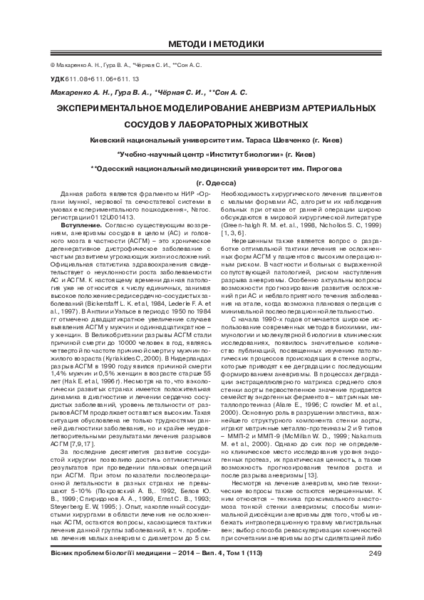