The article presents the historical background, the genesis, clinical and morphological changes, diagnostic criteria of Rasmussen’s encephalitis. Rasmussen’s encephalitis – rare, but severe immune-mediated damage to the brain, which leads to atrophy of unilateral hemisphere with symptomatic epilepsy. Rasmussen’s encephalitis characterized by intractable seizures, often associated with epilepsia partialis continua and symptoms of progressive hemispheric dysfunction, hemiparesis, variable motor deficits, and dementia. Occurrence of focal cortical atrophy has only rarely been described and may have implications regarding pathophysiology and management. It is a well-established cause of pharmacologically intractable epilepsy. Antiepileptic drug treatment fails in most patients and is ineffective against epilepsia partialis continua, which often requires surgical intervention. Given the presence of autoantibodies in many cases, particularly GluR3 autoantibodies, a variety of immunotherapy treatments have been attempted with varied success. The pathogenesis of Rasmussen’s encephalitis is still largely unclear. A causative pathogenic viral agent has so far not been identified. Evidence supporting GluR3 autoantibody-induced injury is conflicting, and there are cases in which such autoantibodies do not appear to exist. Rasmussen’s encephalitis is now believed to be an ongoing and progressive immune-mediated process which induces apoptotic neuronal cell death and involves the neuroglial and lymphocytic response, leading to progressive deterioration of a single hemisphere. These findings suggested a potential benefit of antiinflammatory and immune-suppressive therapy in patients with Rasmussen’s encephalitis in order to attenuate seizures as well as progressive neurological deficits. Indeed, antiepileptic drug treatment fails in most patients and is ineffective against epilepsia partialis continua. The one case from the own practical experience has been described, presenting some clinical evidence and pathologic changes, detected during autopsy of 28 years young man, suffered from Rasmussen’s encephalitis over 20 years. Disease characterized by treatment-resistant epilepsy, neurological and cognitive dysfunction. The case of pathology of Rasmussen’s encephalitis is presented as a focal cortical atrophy. Histological examination of the brain revealed atrophy of the left hemisphere and subcortical nuclei with neuronal loss, astrocytic gliosis and oligodendrogliosis, uneven patchy expressed perivascular mononuclear infiltrates, neuronal degenerative changes, focal spongiosis, perivascular and pericellular edema and hemorrhage diapedetic. 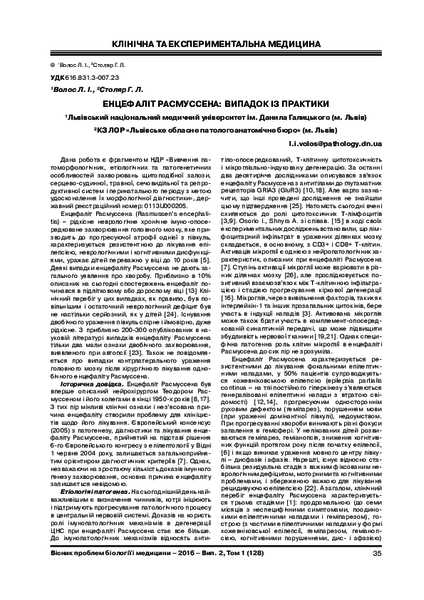