Bulletin of problems biology and medicine / Issue 2 part 1 (128), 2016 / MODERN PSYCHOTHERAPEUTIC STRATEGIES IN THE TREATMENT OF PATIENTS WITH DEFECTS AND DEFORMATIONS OF THE FACE
Skrypnikov A., Herasymenko L., Isakov R., Rud’ V., Kydon’ P.

The aim of the study was to research clinical and psychopathological features of patients with defects and deformations of the face and development on this basis the psychotherapeutic treatment strategies in pre and postoperative period. For the period from 2005 to 2015, we examined 197 patients with congenital or acquired defects and deformities of the face, which is considerably deviated from the physiological and aesthetic norms, distorted appearance and be clearly visible at first glance at the patient. Patients were divided into two groups, the main group consisted of patients (107) who gave consent to perform therapeutic activities, the second group of treated patients (90 men) received treatment at traditional schemes and protocols for reconstructive plastic surgery. In the overall clinical structure identified mental and behavioral disorders are the most common dysthymia F34.1 (26,85%), mixed anxiety and depressive disorder F41.2 (22,07%), somewhat less was observed neurasthenia F48.0 (16,67%) and somatoform disorders F45.0 (15,74%). Syndromal structure of diagnosed mental disorders were follows: anxiety syndrome was diagnosed in 36,96% of the total number surveyed, asthenic-neurotic – 30,43%, anxiety-depressive – turnout-17.39%, anxious-hypochondriacal – 13,04%, dismorphophobia – 8,70%, obsessive-phobic – 6,52%. On the basis of the obtained results were developed individual programs of psychotherapeutic assistance, taking into account the characteristics of the patients and stage of surgery (pre - and postoperative). Pharmacotherapy was carried out differentially in accordance with generally accepted protocols of care for patients with neurotic disorders based on individual characteristics of patients. The basis of this program was based on the results of the study comprehensive systems of differentiated approach in treatment. The general direction of psychotherapeutic strategies was the resolution of neurotic conflict, the formation of a harmonious relationship to their appearance, positive attitudes, correction of psychoemotional state, the formation of constructive modules of conduct, of interpersonal interaction among all family members and increase the level of motivation relative to the psychotherapeutic process. The therapeutic effects on the preoperative stage was a combination of psycho - and pharmacotherapy. Psychotherapy in this phase was used using the method of individual rational psychotherapy (P. Dubois, 1995). Pharmacotherapy was conducted in accordance with the standards of inpatient psychiatric care tailored to the individual patient’s characteristics and syndromal patterns of neurotic disorders. The duration of this phase amounted to approximately 7-14 days. In the post-surgery baseline method for the patients was cognitive-behavioral psychotherapy with a combination of individual and group forms of work. As complementary methods were used group family psychotherapy, marital correction (often in tandem with a sex therapist), existential psychotherapy by G. Bugental (2001). Suggestive of the methods of psychotherapy used in forges-hypnosis, autogenic training. Psychotherapeutic sessions were conducted individually or in groups of 5-7 people. Comparison of results in main and control group in favor of the efficiency of the developed system of psychotherapeutic care for patients with defects and deformations of the face, pre - and postoperative phase, as evidenced by a significant predominance of recovery figure (77,3%) and the lack of patients with deteriorating mental status in the main group. In the comparison group were significantly more frequently recorded in patients with no change in mental status (78,9%) under the influence only of surgical treatment.

defects and deformations of the face, psychotherapy 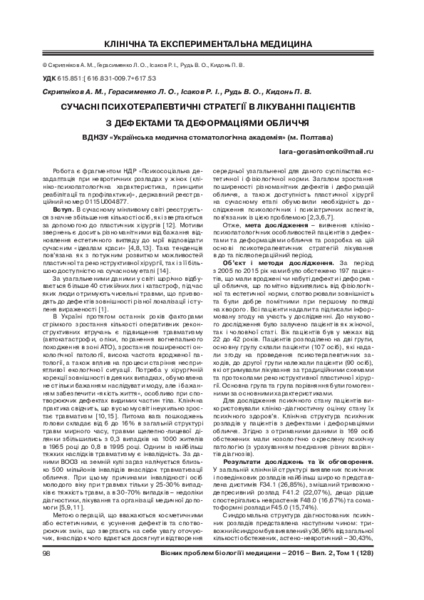