The aim of the study was to examine the dynamics of periodontal tissue changes at the stages of long-term monitoring in patients with generalized parodontitis for the comparative estimation of clinical efficiency of essential phospholipids liposomal form (LFEP). Materials and research methods. It was examined 110 patients with GP in the acute phase I-II degree of severity. The patients were divided into subgroups (n0=55persons, n1=30, n2=25), depending on the content of TDC applied in their treatment and patients of the control group (n=25). Treatment of the patients was carried out using three therapeutic dental complexes (TDC): TDC0 – treatment according to clinical protocol, TDC1 – TDC0 with additional intravenous preparation introduction, TDC2 – TDC0 with additional deposition of preparation by infiltration injections and periodontal dressings. The results and discussion. The oral hygiene condition (OC; according to index OHI-S) at the treatment stages in three comparative groups of patients was characterized by insufficient level before treatment (OHI-S ranged from (4,61±0,31) points to (4,67±0,33) points, did not differ significantly in groups); directly after treatment, the level of oral hygiene condition significantly increased in all groups of patients, the index OHI-S was registered significantly (p<0,05) lower than in the control group (control – (0,48±0,06) points, TDC0 − (0,30±0,06) points, TDC1 – (0,23±0,09) points, TDC2 – (0,21±0,07) points). The condition of gingival inflammation (index PMA) at the stages of clinical monitoring (CM) of patients in three comparative groups was characterized by the average level before treatment (PMA ranged from (43,89±2,47)% to (44,13±2,42)%, did not differ significantly in groups). Condition of gingival papillae bleeding (according to PBI index) at the clinical monitoring stages of the patients in three comparative groups was characterized by almost identical indexes before treatment (ranged from (3,58±0,34) points to (3,64±0,27) points, did not significantly differ in groups) and indicated the presence of spontaneous bleeding of gingival papillae. Conclusions 1. Long-term clinical monitoring of patients groups with GP treated with differentiated TDP enabled to reveal disease course regularities and determine the most informative indicators of functional dental status, including periodontal tissues condition and improve therapeutic tactics due to adjustment of efficient TDP. 2. Clinical efficiency of comprehensive GP treatment with different TDC containing preparation of phosphatidylcholine liposomal form is determined by positive effect on periodontal tissues manifested by significant (p<0,05) decrease in severity and prevalence of inflammatory process, significant (p<0,05) and sustained (up to 12 months) improvement of hemocirculation, decrease in gingivitis manifestations frequency with absence of new periodontal pockets formation and progression of bone resorption. 3. TDC extension due to deposition of preparation by infiltration injections and applying periodontal dressings enables to achieve significantly longer remission periods of GP and inhibit generalization of the process. Prospects of further researches on this issue are related to the study of oral fluid properties changes and immune metabolic characteristics of patients at the clinical monitoring stages. 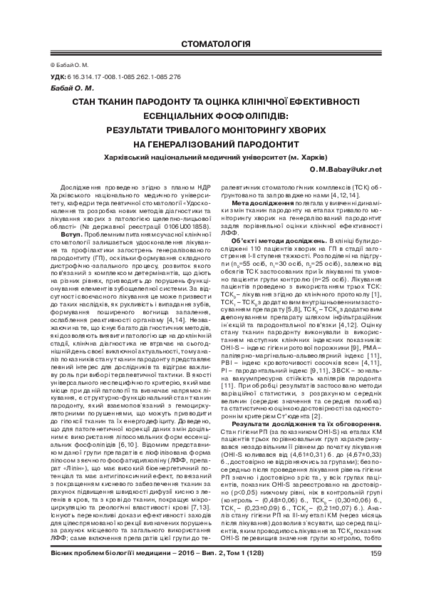