Bulletin of problems biology and medicine / Issue 2 part 1 (128), 2016 / VARIABILITY OF THE DENTAL ORGAN IN THE VERTEBRATA
Zaitsev A., Kotelevska N., Boichenko O., Nіkolіshin A., Ostrovska L.


VARIABILITY OF THE DENTAL ORGAN IN THE VERTEBRATA

The article considers the evolution of the vertebrate tooth. Literary sources were used like the objects with the information of the tooth morphology and our researches. Evolutional analyses were used like the methods of results discovers. The documents say that the age of the most ancient teeth were about 500 mln. years (early Ordovician). These teeth were conical formation and the height were 1,5 mm. Microscopic examination of the teeth shows that their walls were built of the typical dentin, that were penetrated by thin dentinal tubules. The outer surface of the tooth was covered by the layer of enamel substance. These teeth have a pulp chamber. The tooth evolution was listed in the article. The opinions of the scientists were pointed. They think that dental organ has changed the position in the Vertebrata organism, has acquired additional morphological and functional structures and has given the beginning for the tissue and organ. The types of the animals, which have described changes, and the geological time of these changes were listed in the article. The first bone was in the shells of the osteostraks. These shells had cavity with the osteocytes and they were connected to each other by thin tubules. The article shows that the internal skeleton was created by the nature in the Vertebra animals. The oral cavity was pointed in these animals with the jaws. The fish (Pisces) have these attributes. Described in the article derms teeth of the first vertebrates, according the opinions of the some scientists, has given rise of the teeth, that were located in the oral cavity. The article shows that the first gnathostomatous animals were appeared in the Early Silurian (about 430 million years ago). The article lists the opinions of the scientists, that the squama, feathers, hair, horns, hooves and other acquisition the vertebrates were the transformations of the teeth. The article lists the opinions of the scientists, that the teeth gave the rise to the other organs. The fish and some amphibians, that have the tadpole stage, got the «sixth sense» or seismosensory system (lateral line). This formation was observed firstly in the phylogeny of the vertebrates of the first fish. For the next evolution of the vertebrates animals, seismosensory system gave the beginning of the fish lateral line and the auditory system of the ground vertebrates. The article noted that the other senses are modifications of the seismosensory system. The article noted that the taste system was made for the same principal. Lower vertebrates have the elements of the taste system on their heads. Olfactory organs appear as two blind ending pits, that containing olfactory cells in their walls. The article describes the types of the animals with the changes that were written above. The geologic time was stated in the article, in which these changes take place. The basis material of the article presents conclusions about the further evolution of the tooth. The article has the meaning of the odonthological organ role and connected transforms in the next phylogeny of the Vertebrata. 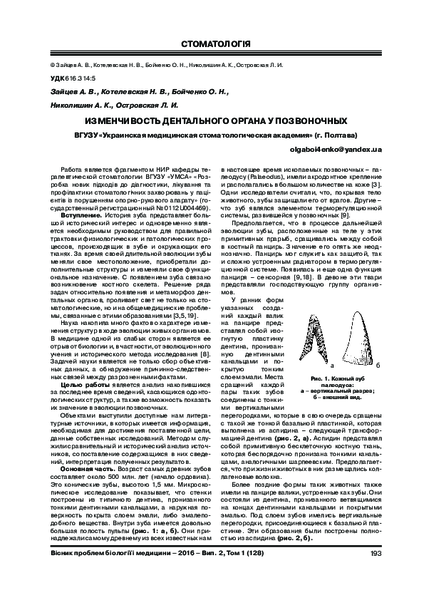