The mucous membrane of the mouth is a mirror of the whole organism state and a target for various factors. Smoking causes pronounced structural changes in the mucous membrane of the gums and their atrophy. Odontopreparation strengthens destructive processes in the mucous membrane of the gums that promotes activation of local immunity (increased synthesis of immunoglobulins). There were revealed significant differences in humoral component of the local immunity (dysimmunoglobulinemia of subclasses IgG) and cytokine spectrum in patients who are non-smokers and smokers. In patients with chronic renal failure there is an increased risk of dental diseases and specific changes in the oral cavity. Increased bleeding of gums, which occurs in almost all patients with chronic renal failure, probably is caused by damage of the vascular endothelium throughout the whole body; in addition, it is the result of platelet dysfunction and impact of anticoagulants. In inflammatory periodontal diseases and bronchial asthma, most likely, there is a single immuno-inflammatory nature of the occurrence, covering both the oral cavity and airways. Significant influence has the decline of the barrier properties of the oral mucosa in patients with asthma, creating unfavourable conditions for hard tissues of the tooth and parodontium, reinforcing the effect of microflora and other pathogenic factors. There is some evidence of the presence of disorders of the immune system in patients with asthma that contribute to the occurrence of periodontal inflammatory diseases. Autoimmune genesis of lichen ruber planus causes periodontal changes, followed by the development of more severe and generalized pathology that requires specific diagnostic and therapeutic protocols. Endocrinological aspects of dental diseases are reflected in a number of basic scientific studies, which indicate the close relationship of diseases of the oral cavity with pathology of the endocrine system. In most cases, diabetes mellitus is accompanied by significant periodontal changes. There is observed some hyperemia of the mucous membrane of the gums with varying degrees of severity of bleeding. Interdental papillae, in most cases, are hypertrophic, pastous, have bright red or bluish colour, indicating the chronic hemodynamics disorder. In prolonged disease interdental papillae have decreased as a result of atrophy and the violation of tooth ligamentous apparatus integrity with the formation of deep periodontal pockets has appeared. Iodine deficiency is an important medical-social problem in many countries. According to the World Health Organization (WHO), pathological conditions associated with iodine deficiency, ranks third in the list of 38 most common non-infectious human diseases. The problem of hypothyroidism at the moment is very important for doctors of any specializations due to the increased prevalence of this disease in the population and manifestations polymorphism. One of the most well-known complications of hypothyroidism is the early development of vascular atherosclerosis. Hypothyroidism causes changes in trace-element composition of dental hard tissues. Histologically there were revealed degenerative changes in the structure of enamel and dentin, formation of osteodentin, slowing of enamel- and dentogenesis, late mineralization of dental germs. In hypofunction of thyroid gland the shape of the tooth crown changes. Canines and molars may take the form of incisors, shorted crowns. However, analysis of the literature sources has revealed no information about the morphofunctional state of the mucous membrane of the cheek and palate under these conditions, while the consequences of iodine deficiency and hypothyroidism are known.

mucous membrane of the mouth, exogenous and endogenous factors 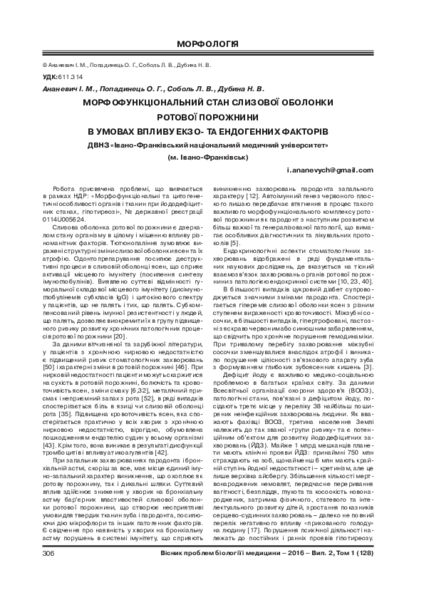