Bulletin of problems biology and medicine / Issue 1 Part 1 (142), 2018 / PECULIARITIES OF THE STATE OF THE HEMOSTASIS SYSTEM IN PATIENTS WITH CKD V D STAGE, TREATED BY PROGRAMMED HEMODIALYSIS, AND INFECTED WITH HEPATITIS B AND C VIRUSES
Storozhuk O. B., Selyeznʹova I. B., Storozhuk L. O., Storozhuk B. H., Dovhalyuk T. V.


PECULIARITIES OF THE STATE OF THE HEMOSTASIS SYSTEM IN PATIENTS WITH CKD V D STAGE, TREATED BY PROGRAMMED HEMODIALYSIS, AND INFECTED WITH HEPATITIS B AND C VIRUSES

The most significant violations of the hemostasis system are observed in patients with chronic glomerulonephritis treated with programmed hemodialysis, and relate both to morphological and functional components. The latter is associated with the regulatory function of the kidneys. It is also known that the kidneys are able to absorb and catalyze fibrinogen-X factor XII. One of the comorbid states in patients with XXII V D stage treated with program hemodialysis is chronic viral hepatitis. This concomitant pathology complicates the course of the underlying disease due to additional endotoxemia and an increase in the processes of chronic inflammation. To date, in clinical practice, there are no clear methodological guidelines for laboratory diagnosis of thrombophilia and the control of the effectiveness of anticoagulant therapy in this category of patients. It is known that the most informative laboratory methods for diagnosing disorders in the system of hemocoagulation are the determination of specific activation markers for the coagulation cascade, the main of which are soluble fibrin and D-dimer. One of the key components in the anticoagulation mechanism is the protein-C-vitaminK-dependent glycoprotein, which is activated to the thrombogenic stimulant and inactivates the factors of the com-bination of Va, Villa and Ha and thrombin. Another glycoprotein, and also a vitamin-K dependent, which stands in the way of joining the external and internal process of aggregation after its activation, is the factor X. The purpose of the work is to study the peculiarities of the state of the hemostasis system in patients with XXII V D stage, which are on program hemodialysis and infected with hepatitis B and C, in order to predict thrombotic complications and control the effectiveness of antithrombotic therapy. We examined 88 patients in the programmed hemodialysis on the CXN V D stage, against the background of chronic glomerulonephritis, aged 26 to 65 years. The average length of stay on the hemodialysis was 7.41 ± 1.01 years. Patients at the same time determined the plasma level of soluble fibrin, D-dimer, protein-C, and blood coagulation factor X in the blood. The activity of protein-C in the blood plasma was determined by activating its venom with a sphincter of the usual one. The amount of cleaved chromogenic substrate S2366 was evaluated spectrophotometrically at 405 and 492 nm wavelengths. The activity of the X-squat factor was determined by activating Russell’s viper (RVV) as its poison, and the amount of the split chromogenic substrate S2765 was evaluated spectrophotometrically at 405 nm and 492 nm. The total content of factor X in the plasma studied was determined by the method of immunoassay analysis using polyclonal antibodies to rabbits. It was found that among the examined patients undergoing hemodialysis (from 1 to 20 years), in 29,5%, hepatitis B or C antibodies were detected, and 4,5% had associated B + C hepatitis. Analysis of the indices of soluble fibrin in the blood plasma of patients showed an increase in its concentration in the general group to 3.68 +/- 0.15 μg / ml, with 65.9% of patients had a content higher than the norm, indicating the activation of the blood clotting system. Estimation of the same level of soluble fibrin separately in the groups infected with hepatitis B or C and not infected revealed a significant difference in the concentration of this protein. Analysis of the content of D-dimer in the blood plasma of all patients showed that in 80.7% of patients, this figure corresponds to the norm, indicating a decrease in fibrinolytic activity and an imbalance between blood-coagulation and fibrinolysis in patients with high levels of soluble fibrin. A separate assessment of the content of D-dimer in the groups of infected and non-infected hepatitis has shown some tendency to increase it in the presence of hepatitis. In the general group of patients, proteinuria-C levels in the blood plasma tended to decrease, while in the case of the distribution of infected and non-infected individuals, this tendency deepened and became reliable. The analysis of blood plasma concentration in the X-factor assay showed that its level in the general group of the examined patients was within the acceptable norm. In the group of infected patients, this figure was somewhat lower, but did not go beyond the norm. Thus, our analysis shows that in the general group of patients who are on program hemodialysis on the CXN V D stage, activation of blood clotting factors (increase of soluble fibrinogen), inhibition of fibrinolysis (insignificant Ddimer) and inhibition of anticoagulant properties of plasma are observed (decrease in the concentration of proteinC). Infection of patients with hepatitis B and C leads to an even greater imbalance of the hemostasis system, while hypocoagulation syndrome is not observed. 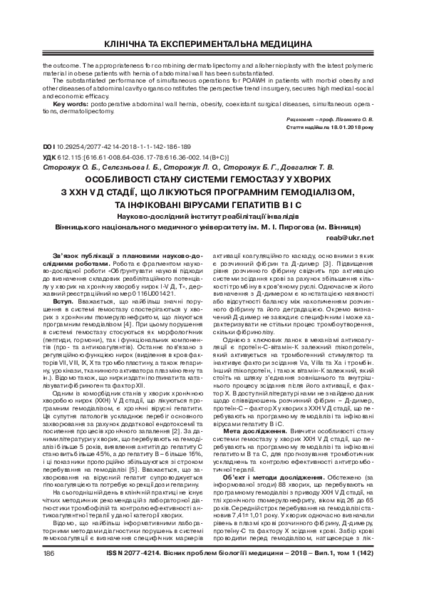