Many studies have shown negative effect of IUI on the condition of fetus and newborn: 80% of patients are found to have a severe somatic disorder that can result in disability and a decrease in the quality of life. Improvement of diagnostic methods, development of adequate methods of treatment, as well as prevention of any infections in pregnant are considered to be pathogenically justified prophylactic measures that can determine the outcome of diseases and predict the state of health in newborns. The purpose of the studywas to develop a mathematical model for prognosis of intrauterine infection implementation in newborns. The object and methods of the study.A retrospective (436 women) and prospective (210 women) study of pregnant women with signs of intrauterine infection during pregnancy were conducted. Depending on the infection, pregnant women were divided into groups with viral, bacterial and combined infection. Additionally, each of the groups was divided into subgroups with implementation and without implementation of intrauterine infection. Prognosis of intrauterine infection implementation in newborns was conducted on a two-point scale (0-low probability, 1-high probability). This task was solved by multivariate discriminant analysis method using STATISTICA 13 software. Diagnostically informative factors were evaluated with a set of 105 working indicators which were studied in these patients. Results of the study and their discussion.Discriminant analysis allowed to determine factors that most influenced the prognosis for viral, bacterial, combined infection and elaborate appropriate mathematical models. Perinatal infection of viral etiology was associated with globulin levels, presence of hepatomegaly in the fetus by ultrasound data and the level of local IgA and IgM immunity, which were established in vaginal washings. Perinatal infection of bacterial etiology was characterized by such significant factors as levels of albumin and beta-globulin, presence of chest hypoplasia and ventriculomegaly in the fetus by ultrasound data, serum sFASL levels, and levels of local IgA and IgM immunity in vaginal washings. Combined perinatal infection was associated with elevated echogenicity of the ventricular system and gastromegaly in the fetus, according to ultrasound data, serum IL-1β levels, copper in cord blood, copper and zinc in serum, caspase-3 level in placenta and level of local IgA and IgG immunity indices in vaginal washings. Based on the obtained indicators for discriminant models, two prognostic functions were obtained, each of which was a linear combination of the selected prognostic factors. The first one corresponded to low probability of infection implementation, the second one to high. For individual prognosis, the given prognostic functions were calculated for each pregnant woman with the presence of perinatal infection and, if the value of the first one was less than the second one, the prognosis was considered unfavourable and the probability of infection was high. Otherwise, the model indicated a low likelihood of infection implementation. The above algorithm can be used in an expert system using any spreadsheet, particularly Microsoft Excel. Conclusion.The use of the rules for constructing a mathematical model for prognosis of intrauterine infection implementation of different etiology implies constitution of constants with input values of selected factors and classification coefficients of the model and determination of the most probable prediction of the results of intrauterine infection on the highest of the two obtained values. 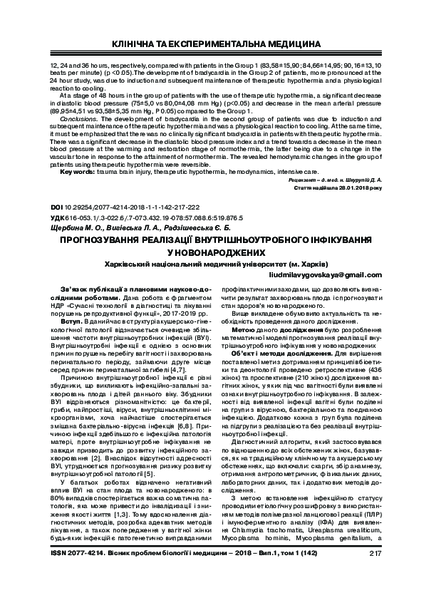